Back To Home
ISNA Press Release & Statements, National News May 25, 2013 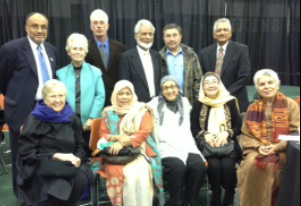 Written by Rania Ayoub, public relations director, Muslim Educational Trust, for Islamic Horizons (May 25, 2013) Dr. Sayyid M. Syeed, ISNA National Director for Interfaith & Community Alliances, was the keynote speaker at the annual fundraising dinner and cultural evening hosted by the Portland,  Ore., based Muslim Educational Trust (MET) May 18, as part of its 20th anniversary celebrations. Dr. Syeed spoke about the sense of dignity, pride, and confidence that Muslims have achieved in the U.S. through organizations like ISNA. He said, “Prophet Muhammad’s experience of Israa and Miraj was a promise to us that our faith does not tie us to materialistic restrictions; rather it ultimately promises us a great possibility of growth and development, both spiritually and materialistically.” Dr. Syeed also talked about how the hijrah was a journey from tribalism to pluralism, a journey from lack of religious freedom and lack of human rights to a place where religion is freely practiced and humans are respected. Dr. Syeed stressed on the benefits of living in a democratic society like the U.S.  He said that American Muslims should be grateful for what they have achieved and should always remember and understand how they achieved it and why they achieved it. MET also organized three other engagements for Dr. Syeed. On May 19, Dr. Syeed was hosted by Portland’s KBOO Community Radio to speak live on their program “An Islamic Point of View” with program host Shaheed Hamid. Dr. Syeed talked about how he feels Martin Luther King’s dream is related in many ways to Prophet Muhammad’s Israa and Miraj and Hijrah. “Islam respects and recognizes pluralism as part of divine design. Whenever there is a retraction from that, you will find racism and exploitation of man by man, and we have to see how we can divert from such inequality,” Dr. Syeed said. Dr. Syeed also spoke about the challenges of the Arab Spring and how democracy will not happen overnight, but it will take time, strong will, and perseverance of the people to accomplish their goal. Later that day, he also met with Portland’s Muslim community leadership to discuss how the community can learn from ISNA’s experience in community outreach, bridge-building, and interfaith work. Among those present were with Imam Mikal Shabazz, president, Oregon Islamic Chaplains Organization, Ahmed Al-Ammine, president, Abu-Bakr Masjed, and Laila Hajoo, president of Islamic Social Services of Oregon State. On May 20, MET partnered with Ecumenical Ministries of Oregon to hold an interfaith conversation with Dr. Syeed who spoke about the experience of the Muslim community in the U.S. and how it’s similar in many ways to the Jewish community’s experience. He emphasized that the Jewish community has an obligation to help the Muslim community during its struggle against Islamophobia. It is ultimately our collective responsibility as people of faith and citizens of good will to alleviate ignorance, hardship, and ill feelings wherever they may be for the sake of a wholesome humanity and a bright and prosperous future for all.. The attendees included Audre Bratcher, St. John Episcopal Church and Ecumenical Ministries of Oregon board member, Rabbi Michael Cahana, Senior Rabbi Beth Israel, Sherry Fishman, Jewish Federation of Portland, Community Relations, Lynn Hingson, Oregon Episcopal  hurch, David Leslie, executive director of Ecumenical Ministries of Oregon, Rev. Dr. Arvin Luchs, First United Methodist Church of Portland, Susan Luchs, First United Methodist Church, Leslie Pohl-Kosbau, Ecumenical Ministries of Oregon, Mollie Reavis, SNJM, Institute for Christian-Muslim Understanding, Mary Jo Tully, Chancellor of the Archdiocese of Portland, David Wheeler, Portland First Baptist Church, Milt Markewitz, Interfaith Council of Greater Portland, Jan Elfers, Between Women (Jewish-Christian-Muslim Group) and Director of Policy at Ecumenical Ministries of Oregon, Rania Ayoub, MET public relations and communication director, and Wajdi Said, MET co-founder and president of the board of directors. The fundraising was for providing scholarships to students from poor families. Those present found it heartening to see children of Somalia and other refugee families enabled to be part of the school program and integrating with their peers in getting the best education. The very sight of it was overwhelming, said Dr. Syeed.
Read more
0shares