Back To Home
International News, ISNA Press Release & Statements May 24, 2013

ISNA Joins Conference on Faith and Reconciliation in Kosovo 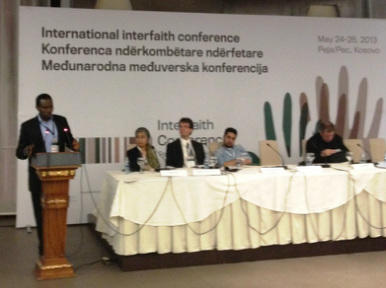 Dr. Elsanousi presents a recommendation at the conference.

From May 24 to 26, 2013, Dr. Mohamed Elsanousi, Director of Community Outreach for the Islamic Society of North America (ISNA), traveled to Kosovo for an conference on “Faith and Reconciliation: What is the Future of Interfaith Dialogue?”  Dr. Elsanousi’s participation exemplified ISNA’s ongoing to further international interfaith relations and lend an American Muslim perspective to these dialogues. This particular conference brought together representatives of key religions, particularly from Eastern Europe, in order to engage challenging divides beyond “a neutral civic setting– which is already an important locus of exchange between many Albanian and Serb representatives.”  The conference sought to contribute both “to a wider global inter-faith dialogue” and “to reconciliation within Kosovo and the wider Balkans region by demonstrating that faith is something that can act as a unifying rather than dividing force.”  The conference was organized by a coalition of European and local organizations engaged in inter-faith dialogue in partnership with international donors and the support of the Kosovo Government.

President Jahjaga, Dr. Elsanousi, and Dr. Al-Naimi at the conference in Kosovo.

The conference developed several key recommendations that were presented to the full conference.  Dr. Elsanousi suggested that the organizers create a coordinating committee with organizers from all other international interfaith conferences in order to coordinate their ongoing work and ensure that it is complementary and not repetitive. At the organizers’ request, Dr. Elsanousi formally presented his recommendation at the concluding session of the conference. Dr. Elsanousi also had the opportunity to meet with Kosovo’s President Atifete Jahjaga to further discuss international interfaith cooperation.  Dr. Ibrahim Al-Naimi, Chair of the Doha International Center for Interfaith Dialogue, also joined the meeting.
Read more
0shares