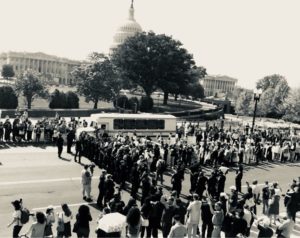 Monday, May 14 marked the official launch of the Poor People’s Campaign: A National Call for Moral Revival. The Islamic Society of North America announces our official endorsement of this momentous movement based on the legacy of the Rev. Dr. Martin Luther King’s 1967 campaign of the same name. We join hundreds of other prominent, mainstream faith-based organizations in our support for the Poor People’s Campaign and its urgent mobilization against poverty, systemic racism, the war economy, and ecological devastation. It is clear that a hunger for justice is rippling through the American public. For our Muslim community, this call to action could not have reached us at a holier time, as the campaign’s 40 days of action coincide with our blessed month of Ramadan. To mark the beginning of those 40 days, people of conscience convened at state capitals across the country to advocate for a moral movement drawn from religious texts calling us toward deep engagement with the struggles of the poor and dispossessed. ISNA’s Office of Interfaith and Community Alliances Director Colin Christopher participated in the Washington, D.C. rally at the U.S. Capitol alongside Linda Sarsour and hundreds of other faith leaders. Faryal M. Khatri, head of ISNA Communications, offered the opening prayer at the Indianapolis rally. In her remarks, she reminded the crowd that, 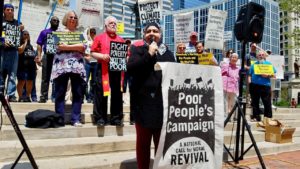 “…when the sun sets, I will pour myself a glass of water to open my fast. However, 13.8 million households in the United States are unable to afford water and 26.5% of census tracts in Indiana are at-risk for being unable to afford water. Over 17% of Indiana’s children are food insecure. When will they be able to open their fast?”

In state capitals across the country, participants spoke boldly of the pain caused by poverty, and hundreds of people were arrested as they blocked main streets to raise up our nation’s systemic injustices. These courageous acts of civil disobedience, inspired by MLK’s followers’ nonviolent direct confrontation with law enforcement in the 1960s, are an integral part of the mission and values of this Poor People’s Campaign*. It was MLK’s tactics of nonviolent mass civil disobedience that facilitated key victories during the Civil Rights Movements — key victories that, without which, we may have never seen the passage of the Immigration Act of 1965. ISNA wishes to explicitly acknowledge our organization’s debt to the sacrifices of those who led the Civil Rights Movement. Without their actions and the movement’s dimension of mass nonviolent civil disobedience, many Muslims would not have been able to emigrate to the U.S., and our organization would likely not exist, given its origins within immigrant Muslim-American communities.

We are united by our dedication to basic human dignity and justice, and reminded by Allah Ta’ala in the Holy Qur’an when He says, “O ye who believe! stand out firmly for justice, as witnesses to Allah, even as against yourselves, or your parents, or your kin, and whether it be (against) rich or poor: for Allah can best protect both. Follow not the lusts (of your hearts), lest ye swerve, and if ye distort (justice) or decline to do justice, verily Allah is well-acquainted with all that ye do.” This Ramadan, as we fast from food, drink, and intimate relations from first light to sunset, let us also fast from indifference. Let us be the light that guides our communities toward goodness, and takes action. To join the Poor People’s Campaign in your city or state, email our Economic Justice Policy Fellow at ejfellow@isna.net. *We encourage Muslim leaders and congregants to participate in nonviolent civil disobedience in their local communities, however we do not recommend this particular type of engagement for those who are not citizens and those with previous criminal records. For more information, please contact ejfellow@isna.net.
National News Coverage
The campaign has been covered in major national news outlets including the Associated Press, the Washington Post, USA Today, The Guardian, and HuffPost. National TV and radio covered, including two big NPR segments – a curtain raiser on Morning Edition and on-the-scene reporting on All Things Considered – and a primetime segment on MSNBC’s The Rachel Maddow Show.
Click here to view full coverage.
Read more
0shares