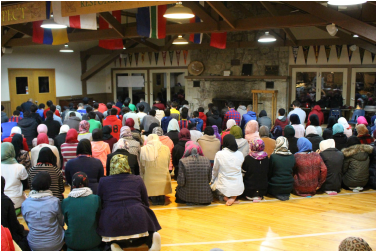 (Plainfield, IN 1/6/15) Last week, Muslim Youth of North America (MYNA) organized its Winter National Retreat at Flat Rock River YMCA Camp in Saint Paul, Indiana. The retreat that took place from December 22 to 27, provided campers with memories for a lifetime. The lectures, workshops and discussions were based around the central theme of “Take a Selfie”, which encouraged campers to reflect on their lives, character, and actions.

<span “font-family:”century=”” gothic”;mso-bidi-font-family:arial;=”” color:black”=””>Speakers in attendance included Jawad Shah, Habeeb Quadri, Sadia Khatri, Amina Darwish and Saad Omar. Each shared a unique perspective on the theme of reflection and benefited campers with their knowledge and insight.

<span “font-family:”century=”” gothic”;mso-bidi-font-family:arial;=”” color:black”=””>One of the highlights of the week came at the very end, when counselors and campers alike came together to showcase projects they had been working on all week, including humorous skits, spoken word pieces, and other talent-filled presentations.