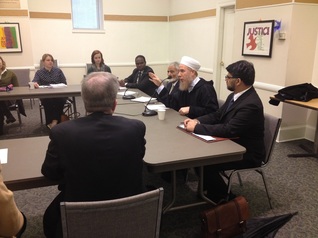 (Washington, D.C. 11/18/14) Yesterday, Islamic Society of North America’s Office for Interfaith & Community Alliances (IOICA) in Washington, DC held a discussion with Sheikh Muhammad Al-Yaqoubi, an internationally renowned Syrian Muslim scholar, classified as one of the 500 most influential Muslim figures in the world. One of the earliest Sunni scholars to denounce the atrocities of the Assad regime, Sheikh Al-Yaqoubi was forced to leave Syria in June 2011. An advocate for the right of the Syrian people in building a civil democratic state, Sheikh Al-Yaqoubi has also been critical of Islamic extremism. During his remarks in the United Methodist building, he highlighted that he was the only Syrian scholar to sign an open letter from a group of prominent Muslim scholars from around the world denouncing Abu Bakr al-Baghdadi, the self-proclaimed head of ISIS, and deconstructing ISIS ideology from the perspective of the Quran, Sunna, hadith, and Islamic scholarship. As an authority on Islamic law and ethics, he spoke about what scholars are doing to counter the ideology of ISIS; why some Syrians have gravitated toward Islamist groups like Nusra and ISIS; and what to do about it. Dr. Sayyid Syeed, National Director of IOICA, said, “It was an honor to host Sh. Al-Yaqoubi and give him the opportunity to talk about interfaith relations in Syria and policy recommendations aimed at defusing sectarian tensions and ensuring the protection of religious and ethnic minorities,” The Islamic Society of North America (ISNA) is the largest and oldest Islamic umbrella organization in North America. Its mission is to foster the development of the Muslim community, interfaith relations, civic engagement, and better understanding of Islam. —END—
Read more
0shares