Back To Home
ISNA Press Release & Statements, National News May 7, 2013 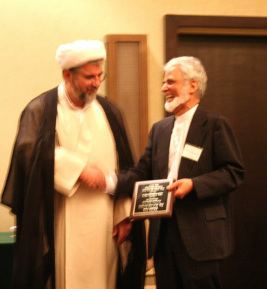 On Saturday, May 4, Dr. Sayyid M. Syeed, ISNA National Director for Interfaith & Community Alliances, spoke at the 25th anniversary banquet for the Alim Academy, one of the nation’s oldest Islamic schools. Alim Academy is a non-sectarian, multi-cultural, Pre-k to 12, Islamic school in Potomac, Maryland, just outside of Washington, DC. It prides itself for being one of the very few institutions where Muslims from different sects or schools of thought, and even non-Muslims, study, pray, and play together under one roof.

“It is my pleasure to celebrate an institution that has now served generations of Muslim children and adults to become better Muslims and better Americans,” Dr. Syeed said.  “Shia-Sunni conflicts appear to be at an all-time high and it is more important now than ever that we come together.  As a Sunni, it is a great honor to have been invited by Shia leaders to come speak this evening.  That in and of itself shows how much this community puts its words into action.”

Dr. Syeed went on to speak about how critical it is to promote a better understanding between various schools of thought and sects within Islam.  All of this is needed at a time when extremists routinely exploit these differences to justify their heinous crimes against humanity, committing violence against places of worship and those who visit them.

In 2006, the Islamic Society of North America (ISNA) invited Mohammad Khatami, former president of Iran, with the opportunity to speak before its full Convention.  President Khatami has consistently advocated for intrafaith and interfaith dialogue, leading him to develop the Dialogue of Civilizations, an international conference that involved many global leaders including the United Nations Education, Scientific, and Cultural Organization (UNESCO). President Khatami’s presence at the ISNA Convention helped internationally demonstrate the American Muslim community’s commitment to dialogue and peacebuilding.  The following year, ISNA brought together leaders from both Sunni and Shia backgrounds to sign a Muslim Code of Honor in front of 12,000 Muslims at the ISNA Convention. It was a collective action which provided American Muslim leaders with the opportunity to join together in forging a common understanding.  Together, the leaders promoted understanding and cooperation for the common good, rejecting any and all divisive practices.

Dr. Syeed encouraged the Alim Academy and other community members to “continue producing a generation of American Muslims who transcend sectarian thinking and can provide leadership and service to the Muslim community at large and to humanity, all the children of Adam.”

“In a pluralist democracy, the majority and minority share power and feel empowered to contribute to the common good,” Dr. Syeed said.  “This is the vision of our Prophet (pbuh) and he established the society in Madina based on those principles. We have seen this model working here in America and we believe this is the formula that is needed elsewhere. Our success in interfaith dialogue here in America must inspire us to put in more efforts and resources in promoting intrafaith dialogue.  Our global community must build more trust, confidence and cooperation in spite of the differences. Islam recognizes a diversity of faiths and beliefs and recognizes differences of opinion and interpretation as a sign of Allah’s creativity and excellence.”