Back To Home
ISNA Press Release & Statements, National News May 22, 2013

The Islamic Society of North America and the Center for Islam and Democracy are proud to present this special event on Friday, May 31, 2013 at 7:00 p.m. at The Stacy C. Sherwood Community Center, located at 3470 Old Lee Highway, Fairfax, VA, 22030.

Rached Ghannouchi is the co-founder and President of the Nahdha (renaissance) movement in Tunisia, which emerged in the recent elections as the largest party in the National Constituent Assembly (NCA). Born in the village of El-Hamma in the south of Tunisia in 1941, Shaykh Ghannouchi was educated in Tunisia’s Zaitouna university, and then continued with studying philosophy in Cairo, Damascus, and Paris. Shaykh Ghannouchi became active in politics by setting up the Islamic Tendency movement in 1981, later changed to Ennahdha (Renaissance). He was imprisoned due to his political activities from 1981 to 1984 and again from 1987 to 1988. After the falsification of the 1989 legislative elections by former president Ben Ali, Shaykh Ghannouchi left for London where he lived as a political exile for two decades, until his return home on 30 January 2011, after the Tunisian revolution. Shaykh Ghannouchi is one of the most important and prolific thinkers in modern Islamic Political thought and theory. Since the early 1980’s, he has been an advocate of the compatibility between Islam and the principles of pluralism, freedom, modernity and democratic governance. His views and writings are influential in Tunisia, and the rest of the Arab and Muslim worlds. 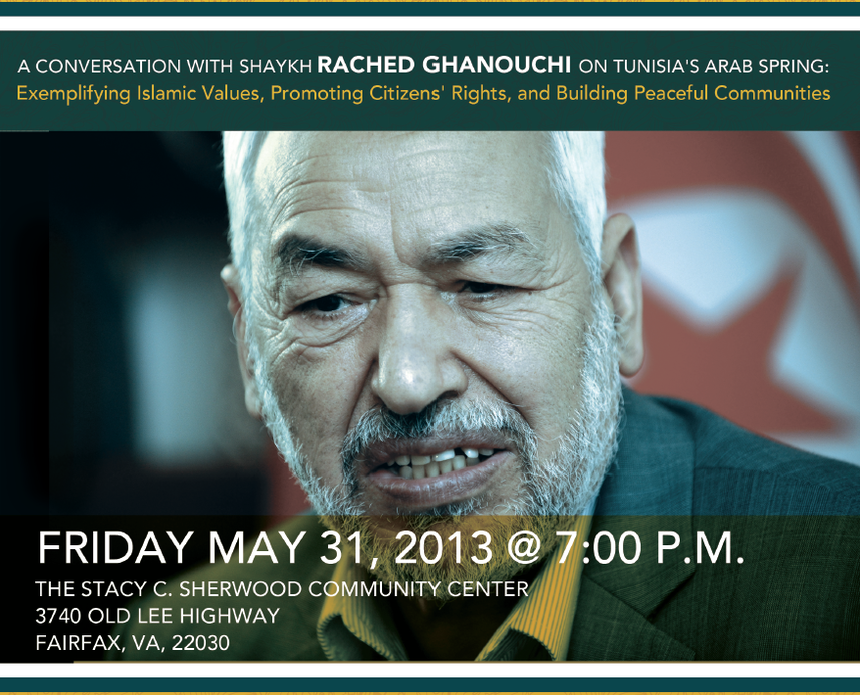