Back To Home
ISNA Press Release & Statements, National News May 21, 2013 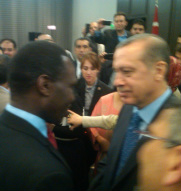 On Saturday, ISNA Director of Community Outreach Dr. Mohamed Elsanousi joined national and Californian Muslim leaders in San Francisco to meet with Prime Minister Recep Tayyip Erdoğan of Turkey. Dr. Elsanousi shared ISNA’s various efforts with the Prime Minister, particularly its interfaith partnership with other religious communities in the United States.  He highlighted the Shoulder-to-Shoulder campaign, an interfaith coalition specifically targeted to address anti-Muslim sentiment. Dr. Elsanousi also spoke about ISNA’s parallel effort to assist religious minorities living in Muslim-majority communities around the world and asked for Turkey’s support. In his remarks, PM Erdoğan urged American Muslims to present an accurate and positive image of Islam and Muslims to the rest of American society. Unfortunately, he said, this image has thus far been distorted by the actions of a few groups that claim to represent Muslims. He condemned terrorism and the killing of innocent civilians. While he acknowledged the American Muslim community’s struggle to integrate in the rest of its society, he said we are also afforded great opportunities by living in the most advanced nation in today’s world. PM Erdoğan spoke about the notion of justice as essential to Islamic rule, emphasizing its fundamental nature for all human beings.  Through Islam we know that all people deserve to live dignified lives; “The Most Just” is one of the many names we use for God.  All relationships between people, the prime minister said, should observe the principle of justice — whether in economic, political, social or any other systems — and the Muslim community must play a role in making this a reality. The prime minister quoted Rev. Dr. Martin Luther King, Jr. who famously said, “Injustice anywhere is a threat to justice everywhere.” He called for justice for all citizens everywhere, irrespective of religious and ethnic origins.  He said we should all respect one another’s religions and help maintain peace among all religious groups.  We should never lean towards extremism. PM Erdoğan then criticized the current structure of the United Nations (UN) Security Council and called for its reform, protesting the injustice in having only five members with veto power.  He committed to speaking out on this issue until it is resolved, and asked Muslims to speak out about the need for reform. He called on American Muslims to seek out higher education and live exemplary lives.  This includes explaining our faith and relationship of God to Americans who do not know Muslims, and taking part in making America a better country.  He added, “We are here for a short time; we will never take anything with us to the grave…..so let not wealth corrupt you.” His message to the broader Muslim world was one of unity — he said we must unite, improve our economic development, and promote democracy.  This means listening to the problems facing our communities and working to alleviate their grievances.  This is democracy, he said, which is in tune with our Islamic heritage.
Read more
0shares