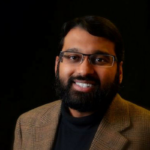 Yasir Qadhi is a lecturer and Islamic orator who has authored several books about Islam. He is a popular speaker in many Muslim circles in the United States, Canada, England and Australia. He was born in Houston, Texas, went to high school in Jeddah, Saudi Arabia, and graduated with a BSc in chemical engineering from the University of Houston. He pursued an education in Islamic studies, and left for the Islamic University of Madinah in Saudi Arabia. There, he completed a second bachelor’s degree, specializing in hadith studies, and then went on to complete an MA in Islamic theology. After the horrific events of 9/11, he decided to return to America, and completed a PhD in Islamic Studies from Yale University in New Haven, Connecticut. Currently, he is an associate professor of religious studies at Rhodes College in Memphis, TN, the dean of academic affairs of Al-Maghrib Institute, and the resident scholar of the Memphis Islamic Center.