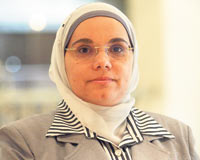 (Washington, DC — March 12, 2013) On March 6, 2013, the Embassy of the Arab Republic of Egypt hosted Dr. Pakinam El Sharkawy, Egyptian Assistant President for political affairs, in her first official visit to the United States.  Dr. Sayyid M. Syeed, the Islamic Society of North America’s (ISNA) National Director for Interfaith and Community Alliances, joined other American faith leaders in welcoming her at the embassy.  “We have congratulated the President Mohamed Morsi on his excellent choice of Dr. El Sharkawy as his representative,” he said.  “These are respectable steps to regain Egypt’s role as a land of peace, prosperity and intellectual leadership in the whole world and in particular in the Arab and Islamic worlds.” Dr. El Sharkawy said that Egypt plans to move forward through its transition with full involvement for all citizens.  Although Christian communities are by no means new to Egypt, she said, she is looking forward to fostering good relations with that community.  Dr. Syeed shared with her the positive experience that American Muslims have had as a minority here in the United States.  When anti-Muslim sentiment escalated in 2010, prominent Christian and Jewish leaders stepped forward to condemn it, establishing the interfaith campaign,Shoulder-to-Shoulder: Standing with American Muslims; Upholding American Values. Last week’s event marked the first official visit by a woman-led delegation from the Egyptian presidency to the United Nations Commission on the Status of Women (CSW), where she delivered a speech on Monday.  President Obama’s Special Envoy Rashad Hussain joined the event, as did Christian leaders Rev. Joel Hunter and Rev. Bob Roberts.
Read more
0shares