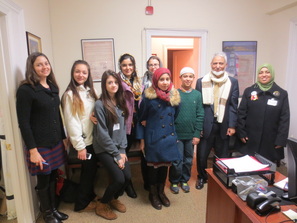 December 12, 2013-Muslim activists from Newtown’s Al Hedaya Islamic Center came to lobby leaders on Capitol Hill as part of their campaign to end gun violence. They, along with Dr. Syeed, attended The National Vigil for Victims of Gun Violence on Thursday, December 12 at the Washington National Cathedral. Here is a CNN link that covers the vigil.