The National Vigil for Victims of Gun Violence 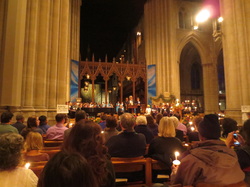 December 12, 2013-In Newtown last year, twenty first graders and six educators were shot to death in Sandy Hook Elementary School. The National Vigil for Victims of Gun Violence, which was held on December 12th, honored the 30,000+ Americans who have died from gun violence since the Newtown shooting, according to the National Cathedral. The cathedral organized the vigil with the Newtown Foundation, a nonprofit dedicated to gun control. The 800 attendees included priests, imams, rabbis, family members and friends of victims, and ISNA’s very own Dr. Syeed (http://www.nationalcathedral.org/events/NewtownAnniv2013.shtml).  Dr. Syeed, addressing a gathering of people coming from Newtown, Aurora, Chicago and other cities, quoted the Quran 5:23 saying that the killing of one innocent person is tantamount to killing the whole human race. He stressed that this is exactly what we experience when scenes of massacres in Newtown, Boston, Aurora and other cities in America are shown on television. The deadening numbness that these horrific scenes have on all of us—individually and collectively—represents what this verse of the Quran tells us. Unfortunately, we have repeatedly experienced this trauma over the last few years. Syeed explained that the Quran 4:5 warns us to not put our resources in the hands of people who may use them to endanger themselves and others. It is our religious duty to conduct proper background checks with the goal of ensuring that these weapons of destruction do not fall into the hands of those who are prone to acts of reckless violence. Dr. Syeed emphasized to the audience that “this nation provided leadership to the world…We ensured to the rest of the world that these weapons wouldn’t fall into the hands of people who would use them to destroy” (http://www.washingtonpost.com/local/gun-control-advocates-to-hold-vigil-at-national-cathedral-to-commemorate-newtown-deaths/2013/12/12/ca735dea-62c3-11e3-aa81-e1dab1360323_story.html). We must convince our lawmakers to come up with similar restrictions on the sale, ownership and access to guns in this country. It is unfortunate that our nation is far behind other countries like Germany when it comes to gun control laws. In Japan during 20012, only four gun related deaths took place. This is because gun control laws are very effective and innocent people are safe from the recurring tragedies that our nation witnesses. He prayed that our lawmakers learn from other countries and move fast in rectifying the situation here at home
Read more
0shares