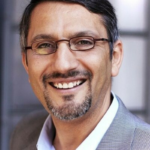 Hatem Bazian is Provost, co-founder and Professor of Islamic Law and Theology at Zaytuna College, the 1st Accredited Muslim Liberal Arts College in the United States. In addition, Prof. Bazian is a teaching professor in the Departments of Near Eastern and Ethnic Studies at the University of California, Berkeley. Dr. Bazian between 2002-2007, also served as an adjunct professor of law at Boalt Hall School of Law at the University of California, Berkeley. He teaches courses on Islamic Law and Society, Islam in America: Communities and Institutions, De-Constructing Islamophobia and Othering of Islam, Religious Studies, and Middle Eastern Studies. In addition to Berkeley, Prof. Bazian served as a visiting Professor in Religious Studies at Saint Mary’s College of California 2001-2007 and adviser to the Religion, Politics and Globalization Center at UC Berkeley.
In Spring 2009, Prof. Bazian founded at Berkeley the Islamophobia Research and Documentation Project at the Center for Race and Gender, a research unit dedicated to the systematic study of Othering Islam and Muslims. Prof. Bazian in Spring 2012 launched the Islamophobia Studies Journal, which is published bi-annually through a collaborative effort between the Islamophobia Research and Documentation Project of the Center for Race and Gender at the University of California at Berkeley, the Arab and Muslim Ethnicities and Diasporas Initiative for the School of Ethnic Studies at San Francisco State University; the Center for Islamic Studies at the Graduate Theological Union, Re-Orient Journal, Centre for Ethnicity and Racism Studies, Leeds University, UK and Zaytuna College. Dr. Bazian has authored 4 books, countless chapters in edited volumes and hundreds of articles. In addition to academic work, Dr, Bazian is a weekly columnist for the Turkish Daily Sabah Newspaper and Turkey Agenda online magazine. Dr. Bazian is founder and national Chair of American Muslims for Palestine, board member of the Islamic Scholarship Fund, Muslim Legal Fund of America, President of Dollar for Deen Charity, and Chair of Northern California Islamic Council.