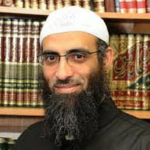 Yaser Birjas is currently the Head of the Islamic Law and Theory Department at the Al-Maghrib Institute and the Imam at Valley Ranch Islamic Center in Irving, Texas. Shaykh Yaser started his career in Electronic Engineering in the UAE, than in Madinah where he graduated as class Valedictorian with the highest honors from The Islamic University of Madinah’s College of Shariah (Fiqh and Usool) in 1996. In 1997, he went to work as a relief program aide to rebuild a war-torn Bosnia. In 2000, he immigrated to the U.S. where he served as an Imam at Islamic Center in El Paso, Texas and a director of English programs in Da’wah and outreach for the Orland Park Prayer Center in Illinois. He went on to earn his masters in Adult Education and Training from the University of Phoenix in 2013. His specialty in the subject of marriage and relations made him a highly sought marriage counselor for the Muslim community.