SNA Saddened by the Passing of Rev. Bob Edgar 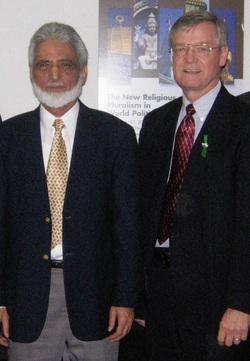 The Islamic Society of North America (ISNA) is greatly saddened at the passing of Rev. Bob Edgar, former congressman and past secretary general of the National Council of Churches of Christ in the USA (NCC).  The NCC is an umbrella organization of Protestant, Anglican, Orthodox, Evangelical, historic African American and Living Peace churches, with 45 million individuals in more than 100,000 local congregations across the nation.

When Rev. Edgar first joined the National Council of Churches in 2000, he traveled to Plainfield, Indiana to visit ISNA’s headquarters. He forged a strong relationship with Dr. Sayyid M. Syeed, then ISNA secretary general.  After 9/11, Rev. Edgar voiced strong and public support for ISNA, fighting back against the negative rhetoric and mistrust expressed toward the American Muslim community.  He continued to do so throughout his 7-year tenure at the NCC.

In his book, Middle Church: Reclaiming the Moral Values of the Faithful Majority from the Religious Right, Rev. Edgar wrote about his relationship with Dr. Syeed and with Rabbi David Saperstein of the Religious Action Center of Reform Judaism.  “I disagree with David and Sayyid on plenty of theological issues and probably even a couple of political ones, too… but their day-to-day work comes far closer to the content of the Sermon on the Mount than the preachings of many leaders on the far religious right.  I would hate to be compared with David or Sayyid in a heavenly contest to see who among us can be most faithful to God’s Will.  I just can’t believe that God has anything but love for them as human beings and awe and appreciation for what they do.”  He added: “In addition to his work on behalf of the poor as well as the environment, Sayyid is also a powerful and forceful voice for healthy, moderate, and faithful Islam.  He is deeply committed to interfaith dialogue.  No religious leader has spoken more passionately against terrorism since 9/11.”

“Bob Edgar was a tireless advocate for interfaith dialogue and cooperation,” said Dr. Syeed, now ISNA’s National Director for Interfaith & Community Alliances. “He traveled to Plainfield, Indiana to visit ISNA’s headquarters in 2000, what became the beginning of a long-lasting partnership between NCC and ISNA. We worked like twins in the post-9/11 era to fight against bigotry and hatred. He was a saintly Christian leader with a commitment for pluralism and moderation and provided support and strength to our community. He addressed our conventions and meetings and invited us to address his leadership meetings.  His tremendous work enabled us to build strong trust and confidence between both our communities. We will remember him as an inspiring leader and compassionate friend representing the best of Christian values.”

More about the life of Rev. Bob Edgar can be found here.