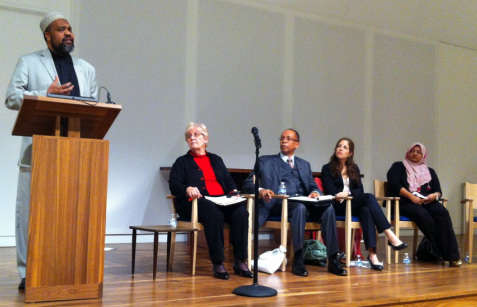 On Monday, the Shoulder-to-Shoulder campaign partnered with the United Church of Christ and the Interfaith Conference on Metropolitan Washington to host an event titled, “Mobilizing Our Community: A DC Public Forum on Challenging Anti-Muslim Discrimination.”  Members of faith communities in Washington, DC attended the panel with religious leaders and experts to talk about anti-Muslim sentiment and then met for roundtable discussions on ways to address it.

In October 2012, DC metro transit riders came face-to-face with hateful anti-Muslim ads in four metro stations.  Interfaith and civil rights groups joined to address the ads head-on through vigils, op/eds, counter ads and letters to the local transit authority.  Because these ads reflect a larger and more troubling trend, many in the DC community are passionate about putting a stop to the sharp rise in anti-Muslim activity through immediate interfaith action.

Rev. Dr. Dennis Wiley, co-pastor of Covenant Baptist United Church of Christ, is at the forefront of the struggle for freedom, justice, and equality for all, and spoke about challenging anti-Muslim sentiment as a next critical step in our nation’s civil rights movement.  Rachel Laser, Deputy Director of the Religious Action Center of Reform Judaism, spoke about the findings of the Center for American Progress report, Fear, Inc.: The Roots of the Islamophobia Network in America and the role that the media has played in both perpetrating and counteracting anti-Muslim rhetoric.  She highlighted the #MyJihad campaign as a great example of Muslims reclaiming the meaning of the word “jihad” as an inner struggle to do what is right.  Rabia Chaudry, Founder and President of the Safe Nation Collaborative, explained the specific policy issues that have led to discrimination against the Muslim community, such as harsh immigration policies and bigoted training materials in the Department of Homeland Security and FBI.

ISNA President Imam Mohamed Magid closed the panel by speaking about how powerful this work has been for him and for others in the Muslim community.  “On the second anniversary of 9/11, when we were concerned about threats against my mosque, the ADAMS Center, people of all faiths –Jews, Christians, Sikhs, and others– came to the parking lot of ADAMS Center and stayed there all night protecting it.”  These acts, and the actions of civil rights workers throughout the history of our country, have allowed him to be able to be who he is in America.

“There are many things we can do,” he added. “Muslims can have ‘mosques without walls,’ being more open and inviting to others in their community so people come to know about Islam and Muslims. And every one of us has a responsibility to speak out against hate.  If you hear something on the radio about Muslims that you know is wrong, call into that radio show.  If you read something in the newspaper that portrays Islam incorrectly, write a letter to the editor.”