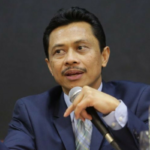 Imam Shamsi Ali is a prominent moderate Muslim Scholar known for promoting interfaith dialogues among Abrahamic Religions in United States and the Chairman of the Al-Hikmah Mosque and the Director of Jamaica Muslim Center in Jamaica, Queens, New York City. Within the Indonesian Muslim community in North America, he serves as an Advisory Board to major national Muslim organizations such as IMSA (Indonesian Muslim Society in America) and ICMI (Indonesian Muslim Intellectual Society in America). He is also the president of Nusantara Foundation, a community based operating and non-profit organization in New York that is established, publicly supported, operated by, and for the benefit of Indonesian culture