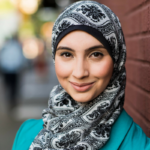 Rowaida Abdelaziz is a journalist at Huffpost, where she focuses on reporting on civil rights and social justices issues within the Muslim community. Rowaida spearheads the coverage of Islamophobia and the rising anti-Muslim sentiment across the U.S at Huffpost. Her goal is to provide guidance for diverse coverage of the Muslim community in mainstream media as a hijab-wearing woman in the newsroom.
In 2016, Rowaida was a lead reporter for the Islamophobia Tracker, a project that documented the anti-Muslim rhetoric that spiked across the U.S. She also launched HuffPost’s Tomorrow Inshallah, a community Facebook page that targets and amplifies Muslim voices and perspectives. Fluent in Arabic, Rowaida also has written numerous stories on the Middle East and covered the refugee crises in Syria, Yemen and other parts of the Arab world. Before joining HuffPost, Abdelaziz was at the Committee to Protect Journalists and Al Jazeera Arabic at the United Nations.