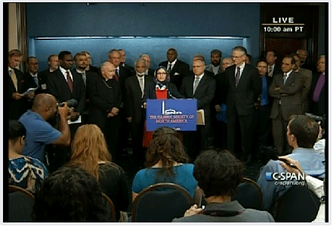 As part of its mission, ISNA seeks to help represent the voice of diverse Muslim communities within the United States, as well as to represent an American voice within Muslim communities around the world.  Both goals require heightened attentiveness to issues of religious freedom and civil liberties, which ISNA seeks to address through positive interreligious partnerships both here in the U.S. and abroad. Domestically, ISNA helped convene the interfaith campaign, Shoulder-to-Shoulder: Standing with American Muslims; Upholding American Values, and speaks out on behalf of the rights of Americans of all faiths and no faith.  ISNA is an outspoken advocate of the First Amendment and believes that hateful rhetoric should be condemned by society at large and not by the government.  Just as Jewish and Christian leaders support Muslims through Shoulder-to-Shoulder, so does ISNA join in upholding American values by condemning antisemitism and other forms bigotry.

ISNA President Imam Mohamed Magid and ISNA Director of Community Outreach Dr. Mohamed Elsanousi meet with Shaykh Abdallah bin Bayyah and Mauritanian President Mohamed Ould Abdel Aziz in Nouakchott, Mauritania (July 2012)
ISNA is also a major advocate of international religious freedom and routinely calls for the right to religious freedom around the world, regardless of region or religious affiliation.  ISNA has spoken out on numerous occasions on behalf of numerous persecuted groups, from Muslims in Myanmar (Burma) and China to Christians in Egypt and Pakistan. Over recent years, ISNA has become increasingly concerned not only about the challenges faced by Muslim minorities within the United States, but also those faced by religious minorities in Muslim-majority communities around the world.  There have been numerous reports about serious violations of the rights of religious minorities in Muslim-majority countries–incidents which stand in stark contrast to the values and traditions of Islam. Historically, when such circumstances arise which run counter to Islamic teachings and principles, it has always been the role of Islamic scholars to intervene.  As such, ISNA is currently working together with Muslim leaders worldwide to promote a mechanism for developing Islamic standards and protocols on religious freedom and the role of religious minorities in the Muslim-majority communities.  This effort is also in line with ISNA’s domestic priorities, because poor treatment of religious minorities in Muslim-majority communities also has a substantial and negative effect on the manner in which Muslim minorities are regarded and treated in the West.

Since 2012, ISNA has worked actively with Muslim scholars worldwide to address challenges faced by religious minorities in Muslim-majority communities around the world.   In May, ISNA held a symposium with Georgetown University’s Prince Alwaleed bin Talal Center for Muslim-Christian Understanding to share this work with government officials, think tank experts, academics, and religious leaders in the Washington, DC area.  In July in Mauritania, ISNA convened a key group of Muslim scholars with expertise on these issues to plan for a scholarly conference on religious freedom, and in November, ISNA held an Inaugural International Conference on Citizenship and the Rights of Minorities in Muslim-Majority Countries in Tunisia.  Click here to read more about that conference. In 2013, ISNA hopes to hold a larger gathering of Muslim scholars from all over the world for an International Conference on Citizenship and the Rights of Minorities in Muslim-Majority Countries.  The hope is that this conference would produce consensus within the community of Muslim scholars regarding Islamic jurisprudence on this issue, with a signed declaration by all present.  The conference organizers would then seek the support of each of these scholars in advancing these ideals in Muslim-majority communities worldwide. ISNA hopes this effort will also significantly contribute to advancing the work of United Nations Human Rights Council Resolution 16/18, which seeks to advance respect and tolerance for all religions and to combat religious discrimination.  This resolution was initiated and sponsored by the Organization of Islamic Cooperation (OIC) in 2011, the second largest inter-governmental organization in the world.  The OIC has also provided ISNA with a formal letter declaring its endorsement for this conference and a strong commitment to support ISNA’s efforts.