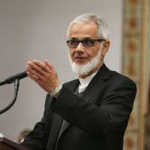 Muzammil Siddiqi received his BA in Islamic and Arabic studies from the Islamic University of Medina, Saudi Arabia and later went on to complete a degree in comparative religion at Harvard University. Since 1981, he has served as the director of the Islamic Society of Orange County in Garden Grove, California. He is the chairman of the Fiqh Council of North America. Internationally, he is a member of the executive board of the International Assembly of the Council of Ulama’ in Makkah; a member of the Supreme Islamic Council of Egypt and the Supreme Council of Mosques in Makkah, Saudi Arabia. In October 2011, he was invited by Pope Benedict XVI to join him and many other religious leaders of the world in a pilgrimage of peace. Dr. Siddiqi served as the president of ISNA from 1996 – 2000.