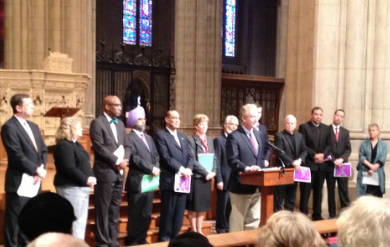 On Saturday, Dr. Sayyid M. Syeed, ISNA National Director for Interfaith and Community Alliances, joined other leaders of Faiths United to Prevent Gun Violence at the Washington National Cathedral to lament the lives lost, unite with a common purpose, and act for positive change. Victims’ families, survivors, interfaith leaders, lawmakers, urban community leaders, and people of all faiths and perspectives gather for a series of panel discussions and an interfaith service.  Religious communities throughout the nation gathered to reflect and act on preventing gun violence, including requiring background checks for all gun sales, removing assault weapons and high-capacity magazines from our communities, and making gun trafficking a federal crime.

“Each time we experience the tragedy of another mass shooting,” said Dr. Syeed, “we understand the meaning of the verse from the Qu’ran which says that to kill one person is like killing all of humanity.  We all experienced the trauma of those events, here in our nation and around the world.  Let us make sure this never happens again.  Let us put our hearts and minds together and prevent guns from entering the hands of those who would misuse them.”

Dr. Syeed and other faith leaders also joined Mayors Against Illegal Guns to release a video, calling on Congress to take action by passing sensible legislation to curb gun violence.