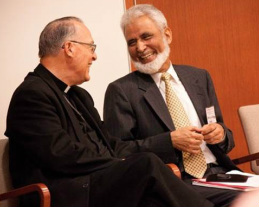 The Midwest Dialogue of Catholics and Muslims is an annual joint initiative of ISNA and the U.S. Conference of Catholic Bishops (USCCB), which began in 1996.  Its mission statement is as follows:
“Catholics and Muslims engage in interreligious dialogue because it is part of our core identities as people of faith. Our common belief in the one God of mercy and love calls us into relationship with one another; therefore we see our dialogue as a spiritual journey. Common ethical concerns compel us to take responsibility for our relationship within U.S. American society. The United States Conference of Catholic Bishops and the Islamic Society of North America sponsor our annual gathering of official representatives for formal dialogue on topics of mutual concern. Our Dialogue provides a forum for Muslim-Catholic discussion, critique, and exchange of information that is supportive of the programs of our respective institutions.”
The dialogue focused first on the theological concept of revelation, and in January 2006, ISNA and the USCCB published written discussion from these dialogues in Revelation: Catholics and Muslim Perspectives.
In the 2011 Midwest Muslim-Catholic Dialogue, members provided concluding remarks on the latest publication efforts regarding the topic of Catholics and Muslims in the public square. Father Thomas Baima, University of St. Mary of the Lake in Chicago, distributed the recently published spring 2011 edition of Chicago Studies, which features the collected papers of dialogue members.
In 2012, the Midwest Muslim-Catholic Dialogue joined together with the West Coast and East Coast dialogues for a National Catholic-Muslim Plenary.  It also brought together a joint written project on Catholics and Muslims in the public square, which will serve as a resource for local religious leaders and will soon be available to the public.
The USCCB and ISNA have partnered on a number of other initiatives, including the Generations of Faith interfaith dialogue and the Shoulder-to-Shoulder campaign.
Highlights from previous dialogues: