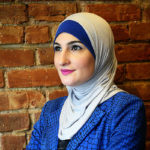 Linda Sarsour is a working woman, community activist, and mother of three. Ambitious, outspoken and independent, Linda shatters stereotypes of Muslim women while also treasuring her religious and ethnic heritage. She is a Palestinian Muslim American and a self-proclaimed “pure New Yorker, born and raised in Brooklyn!” Sarsour is the former executive director of the Arab American Association of New York and co-chair of the Women’s March on Washington, which advocated for just legislation and policies regarding human rights and other issues in the largest single-day demonstration in U.S. history. Linda is most notably recognized for her focus on intersectional movement building.