Judaism and Islam in America 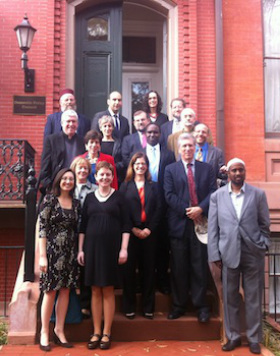 In 2010, the Islamic Society of North America (ISNA) embarked on an interfaith venture with The Jewish Theological Seminary (JTS, the largest Jewish Studies and rabbinic ordination institution in North America) and Hartford Seminary (a unique Christian Seminary that trains Muslim chaplains.) Together the three institutions embarked on a three-part series of workshops and public forums on “Judaism and Islam in America,” providing religious scholars and high-level practitioners with an opportunity for a unique interreligious exchange.
The 2010 workshop titled, “Assimilation and Authenticity,” was the first official encounter of the series, and the Jewish and Muslim leaders took that opportunity to work to build trust and establish common ground.  In the 2011 workshop, we focused on the common interests that serve as identity markers in each religious community: Scriptural interpretation and law. Both workshops offered an opportunity for Jewish, Muslim, and Christian religious leaders to come together and foster constructive dialogue among Jews and Muslims about their experiences as members of minority religions in the United States.
The third and final workshop of this series, “Judaism and Islam in America 3,” was held in October 2012 and focused on applying the previous years’ findings by moving “From Classroom to Congregation.” The Carnegie Corporation, which generously provided funding the previous two conferences, has again provided a contribution for this final conference in the Washington, DC/Northern Virginia area. The 2012 workshop continued the scholarly dialogue of our past conferences and brought congregational leaders together to learn about our findings and how to achieve successful exchange between Jews and Muslims.   The final workshop joined scholars and national leaders together with several rabbis and imams who are dedicated to working together to implement interfaith programming in their communities
ISNA, JTS, and Hartford Seminary are now working to extend and sustain the impact of the workshop to congregations across the country by launching a new pilot program to implement our findings.  Our hope is that congregations will draw from the learning and insights of the “Judaism and Islam in America” conferences by furthering the interreligious cooperation and dialogue that is the hallmark of our workshops, bringing it into the congregational and communal spheres.  In this way, we hope to broaden the impact of the conferences’ scholarly study and interaction and open the door to new advances in Jewish-Muslim relations.
HIGHLIGHTS FROM THE WORKSHOPS: