ISNA Rep Joins Muslim-Jewish Delegation To Meet with Ambassador of Denmark to the U.S. on Danish Halal/Kosher Ban 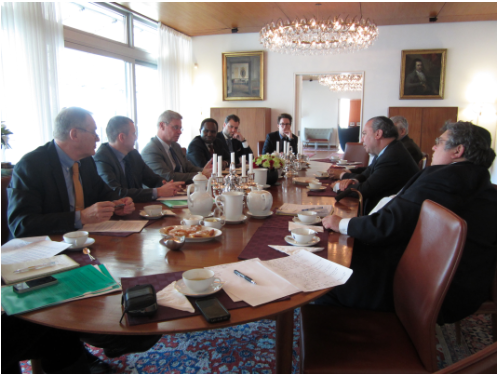 (Washington, D.C. 3/4/14) On Thursday, February, 27, in Washington D.C. the Islamic Society of North America’s (ISNA) Interfaith and Community Alliances Director Dr. Mohamed Elsanousi joined a delegation of American Muslim and Jewish leaders in a meeting with H.E. Peter Taksoe-Jensen, the Danish Ambassador to the United States, expressing concern with Denmark’s recent ban of halal/kosher ritual slaughter. The meeting was organized by the Foundation for For Ethnic Understanding (FFEU).

“We hope that through this meeting, the ambassador can convey our concerns to the Danish government about this ban on kosher and halal meat slaughtering,” says Dr. Mohamed Elsanousi. “Guaranteeing religious rights and freedom is an important aspect a democratic pluralistic society.”

FFEU is organizing similar meetings in London and Paris appealing to the government of Denmark to repeal this violation of religious rights and freedom.