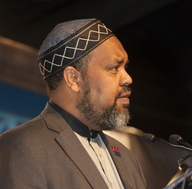 December 11, 2013-Washington, D.C.–Today American Muslims join all Americans and the people of South Africa in commemorating the life and legacy of President Nelson Mandela. In a memorial service led by Vice President Joe Biden and the Rev. Katharine Jefferts Schori at the Washington National Cathedral, ISNA President, Mohamed Magid, offered remembrance of the Islamic values Mr. Mandela personified. “As we think about the life of Nelson Mandela, I am reminded of virtues in the Holy Qur’an that President Mandela embodied, ‘And not alike are the good and the evil. Repel evil with what is best, when lo! He between whom and you was enmity would be as if he were a warm friend’” (Quran 41:34) He continued, “The Prophet peace be up him said, ‘To have faith is to forgive those who have wronged you, to give to those who deprived you, and to maintain relations with those who cut theirs with you.’” Religious leaders, activists of Mandela’s legacy, and those who knew him, offered prayers and tributes. South Africa’s Ambassador Ebrahim Rasool, thanked the people of the United States and the world for their love and reverence of Nelson Mandela as he expressed the people of South Africa to continue to try to recover from the shock of losing an iconic leader. “Here too, in America, they will not let Nelson Mandela pass out of existence”, he said. When asked about the importance of joining Mandela’s memorial service, ISNA President, Imam Magid replied, “We are Americans, joining together, irrespective of religious belief, color, or race, to celebrate a great man, who lived the teachings we all share as people of faith, that there is no superiority of one human being over the other, except in good works. And that peace and forgiveness are most pleasing in the eyes of God. As Americans, Mr. Mandela also embodied the foundation of this great nation, that ‘All men are created equal, that they are endowed by their Creator with certain unalienable rights, that among those are life, liberty and the pursuit of happiness’. South Africa raised a leader for the world, and we are grateful for the example he has set. It is now our duty to carry his great legacy, to teach our children, and the generations that follow, of a young South African farmer who left a profound impact on humanity.”
Read more
0shares