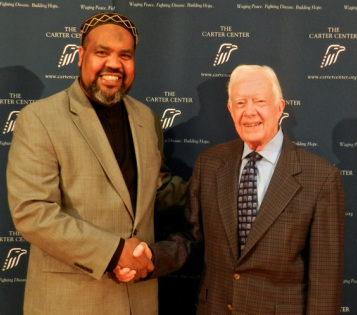 Last week in Atlanta, Imam Mohamed Magid, President of the Islamic Society of North America, joined other top religious leaders, activists, and religious scholars, representing more than 15 countries and over 35 faith-based organizations, universities, and religious bodies, for a conference entitled “Mobilizing Faith for Women: Engaging the Power of Religion and Belief to Advance Human Rights and Dignity.”   The event was organized by The Carter Center under the leadership of former US President Jimmy Carter. The conference highlighted the influence of religion on women’s rights and called on people of faith and religious leaders to assume their responsibility to advance equally the well being of all members of society. Discussions focused on aligning religious life with human rights, stopping human trafficking, connecting religious study to advocacy, and the impact of war on women. President Carter called the abuse of women “the most pervasive and unaddressed human rights violation on earth… which persists in almost every country on earth, and for which there is a great aversion among men leaders, and even some women leaders, to admit that this is something which exists, that it is serious and troubling and can be and should be addressed courageously.”  He added, “The tremendous influence exerted by religious leaders carries with it the moral responsibility for them to take action to address human rights violations of girls and women, including the global problem of sexual violence.” “Throughout much of history, men have defined religious norms and texts, and women’s voices were silenced. It is time for women to reclaim their religion,” said Dr. Ziba Mir-Hosseini, a founding member of Musawah Global Movement for Equality and Justice in the Muslim Family, who attended the conference. “This is one of the most important human rights conferences I have ever attended,” said ISNA President Imam Mohamed Magid.  “It was eye-opening to see the scope and depth of efforts that people are engaged in around the world to protect and advance women’s rights.  At the same time, I could also see the potential for us to do so much more when people of faith join together to challenge violations of women’s rights, some of the most unaddressed human rights violations of all time.  I look forward to working with other participants on this important issue and greatly appreciate President Carter’s work in convening and fully participating in the entire conference.”  Imam Magid spoke on the forum’s final panel about connecting religious study, action and advocacy in order to transform local actions into a global movement. The leaders concluded the conference by calling on all believers to work within their communities to seek positive solutions for violence against women and other gender-based violations of human rights.  Specifically, they called for: The full statement can be read here.  More information about the conference, including a video recording, can be found here.
Read more
0shares