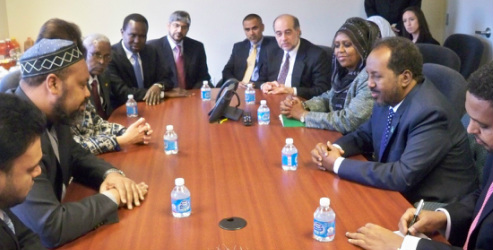 On Friday, January 18, 2013, Islamic Society of North America (ISNA) President Imam Mohamed Magid hosted the newly elected Somali President Hassan Sheikh Mohamud at the All Dulles Area Muslim Society (ADAMS) Center in Virginia.  ISNA was delighted to have the opportunity to welcome the new President after a long period of political instability in Somalia.  His visit to Washington, DC marks the first time the U.S. government has recognized the Somali government in 20 years, and ISNA is hopeful that his leadership may indeed provide stability and peace to the country. During the meeting, President Mohamud expressed his vision for a new Somalia, sharing his hopes for its transformation.  Specifically, he appealed to the American Muslim community to help him build youth centers across the country to provide vocational training and educational programs for youth and to help guide them in a positive direction.  Imam Magid was moved by President Mohamud’s vision and agreed that priority should be given to the youth, offering to help the President realize that goal. Several other esteemed leaders also joined the meeting.  These included representatives of the U.S. government such as Farah Pandith, U.S. Special Representative to Muslim Communities; Rashad Hussain, U.S. Special Envoy to the Organisation of Islamic Cooperation; and Ambassador Johnnie Carson, U.S. Assistant Secretary for African Affairs.  Representatives of other Muslim organizations were also present, such as Naeem Baig of the Islamic Circle of North America, and Humera Khan of Muflehun Institute.  Accompanying President Mohamud were his Chief of Staff, Kamal Dahir Gutale, and Somali Foreign Minister Fowsiyo Yusuf Haji Aadan.
Read more
0shares