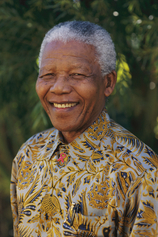 December 6, 2013-The Islamic Society of North America (ISNA) today mourns the loss of President Nelson Mandela, the revered international symbol of freedom and Nobel Peace Prize winner who fought against racial inequality in Apartheid South Africa. “During my lifetime I have dedicated my life to this struggle of the African people. I have fought against white domination, and I have fought against black domination. I have cherished the ideal of a democratic and free society in which all persons will live together in harmony and with equal opportunities. It is an ideal for which I hope to live for and to see realized. But, My Lord, if it needs be, it is an ideal for which I am prepared to die.” (Nelson Mandela, 1964) Mandela’s heroic and tireless sacrifice was well known, enduring over a quarter of a century in prison for what he believed. “Nelson Mandela was a truly exemplary leader,” said ISNA President Imam Mohamed Magid. “His passion for reconciliation instead of revenge after the fall of Apartheid was an expression of compassion that Islam expects from all of us,” he added. In June, ISNA urged members to pray for President Mandela when his health condition turned critical: SEE: ISNA Urges Its Members to Pray for President Mandela We pray to God that his legacy will continue to inspire others to carry on the struggle to end social injustice and racial inequality around the world. The Islamic Society of North America (ISNA) is the largest and oldest Islamic umbrella organization in North America. Its mission is to foster the development of the Muslim community, interfaith relations, civic engagement, and better understanding of Islam.
Read more
0shares