ISNA Meets with Muslim and Interfaith Communities in Central Virginia 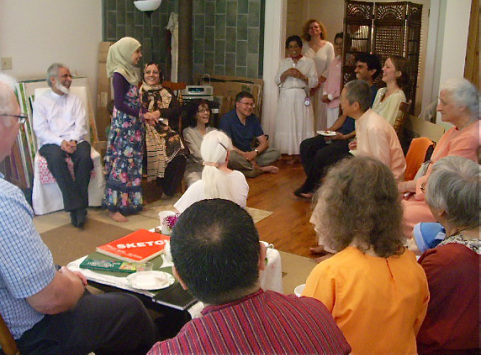 On Friday, June 7, Dr. Sayyid M. Syeed, ISNA National Director for Interfaith and Community Alliances, traveled to central Virginia to meet with Muslim and interfaith communities there.  He delivered the khutba at the Islamic Society of Central Virginia (ISCV) in Charlottesville, VA, and met with its leaders, Dr. Mohamad Abd-el-Badeea, Dr. Emaad Abdel-Rahman, Dr. Aliaa Khidr, and other ISCV representatives and interfaith leaders.  The Islamic Center warmly welcomed representatives from the LOTUS Center for All Faiths as their special guests and made them feel at home during the Friday prayers. That evening, he spoke at the LOTUS Center for All Faiths before an interfaith gathering at Satchidananda Ashram in Yogaville, VA.  He spoke about how the American experience is reinforced by the model of Madina at the time of the Prophet Muhammad and how this model has shaped our institutions and understanding here in America. “This year,” he said, “June 7th is a sacred night for Muslims, called the Night of Ascension. On that night, the Prophet  Muhammad had a transcendental experience which included seeing the vision of a new phase in the life of the Muslim community under his leadership. Within one year he would migrate from Mecca, a city where he and his followers were persecuted, to Madina. This migration is commemorated by Muslims as the beginning of the Islamic calendar, this year being 1434 years after the migration to Madina. The migration took place because of the lack of religious freedom Muslims had in their hometown. When they moved to Madina, they had full freedom to practice their religion and create a pluralist society living along side with Jews, Christians and people of different tribes and ethnic origins. Many Muslims who migrated from lands where these freedoms are not available, now enjoy these same benefits in America. We have a responsibility to make this pluralist form of society work for us and for others.” The following day, he participated in an interfaith panel discussion on “contributing to interfaith understanding” and spoke again to both live and webcast audiences about the core teachings of Islam and their relevance in a pluralist democratic environment. “On behalf of all at Yogaville, I wish to express our gratitude for coming and sharing the great teachings of Islam with us,” said Swami Dayananda, Director of the LOTUS Center for all Faiths. “Dr. Syeed’s presentations were dynamic, educational and truly inspirational.”
Read more
0shares