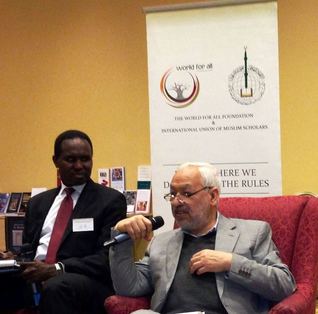 (April 2, 2013) This past weekend, leadership from the Islamic Society of North America (ISNA) participated in a Colloquium of Muslim Minority Leaders to reflect on the state of the Muslim World, especially the situation of Muslims who live in societies where they constitute a numerical minority.  The meeting was hosted in Paris, France by the World for All Foundation, based in South Africa.

Dr. Ingrid Mattson, ISNA Past President, Dr. Sayyid M. Syeed, ISNA National Director for Interfaith & Community Alliances, and Dr. Mohamed Elsanousi, Director of Community Outreach, participated in the program.  Dr. Ingrid Mattson spoke about living in a post-9/11 world, in response to a keynote address by Dr. Tariq Ramadan on extremism and anti-Muslim sentiment. Dr. Syeed spoke about interfaith outreach in North America during a session on “Sharing Best Practices” and Dr. Elsanousi moderated a session on theological and conceptual tools, featuring Shaykh Rached Ghannouchi of Tunisia and others.

The format of the Colloquium was an attempt to create a round table, structured discussion with concrete outcomes and the development of practical solutions and action.  Participants were broadly representative of the minority experience across six continents.  Topics discussed included:

The Colloquium concluded by appointing a committee to work on drafting a declaration which all participants can review and sign.  The hope is that this declaration will serve as a working document to invite discussion and debate on content areas from the global Muslim community.

The World for All Foundation “is born out of very specific ways in which a Muslim minority in South Africa has emerged from severe challenges to become equal and dignified citizens in South Africa.  The World for all Foundation believes that if we put our heads together, specifically as Muslim communities who constitute minorities, we can share many lessons – from South Africa and elsewhere – so that we do not repeat each other ’s mistake, follow each other’s long and painful paths to dignity and inclusion, and exacerbate tensions and conflict in our quest for full citizenship wherever we are.”