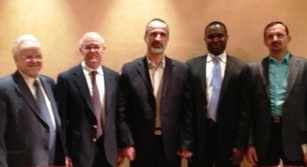 His Excellency Al Khatib affirmed the need for the irreplaceable role of involving Syrian religious leaders in these efforts, and shared his commitment to advancing multi-religious cooperation as a key component of peace and reconciliation.  He stated that “the new Syria must protect all its citizens and its precious legacy of religious diversity.”

RfP General Secretary Dr. William Vendley shared with President Al Khatib that RfP is a civil society, strictly non-partisan organization and “is open to engage in principled partnerships with governments, but utterly deplores and strongly condemns the brutal violence being inflicted on the Syrian people by their own military.”  “Resistance fighters, too,” he added, “must place the safety of non-combatants as their first priority.”

Religions for Peace is the largest international coalition of representatives from the world’s great religions dedicated to promoting peace.  Founded in 1970, RfP has decades of experience in coordinating religious councils to engage international leaders in peacebuilding efforts. RfP Secretary General Dr. Vendley stated: “ISNA’s leadership is an essential key to advancing effective multi-religious cooperation in Syria.”

The meeting was part of the Islamic Society of North America’s (ISNA) ongoing efforts to address the crisis in Syria.  ISNA has also been working closely with Syrian American groups to call on the United States government to increase diplomatic efforts and to call on all people to assist with humanitarian relief for the people of Syria.