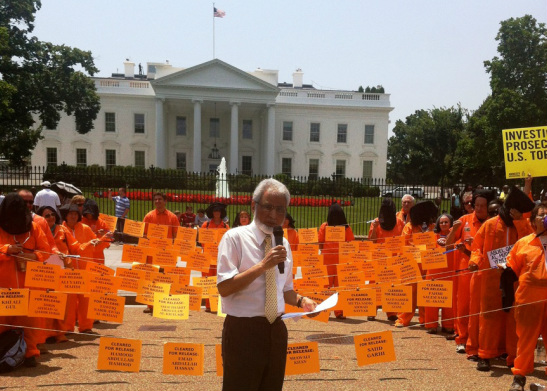 On Wednesday, Dr. Sayyid M. Syeed, ISNA National Director for Interfaith & Community Alliances, spoke at a Public Witness Against Torture in front of the White House.  The event took place to commemorate the UN International Day in Support of Torture Victims and to call for the closure of the prison at Guantanamo Bay. “Torture is forbidden in every religion,” said Dr. Syeed.  “It is not surprising that all faith groups have stood up against the use of torture in our country. God created human beings and invested them with dignity, but torture robs them of their dignity, their sanity and their humanity. It is tragic that torture exists, because our Prophet Muhammad (peace be upon him) told us that torturing a living being — human or animal — robs the perpetrators of the torture of their humanity and robs them of the rewards of good and righteous deeds they may have otherwise performed. He explained this by giving the example of a woman who worshiped God and fasted for His sake, but the fact that she tortured her cat deprived her of the rewards that she could have earned for her good deeds.” He added: “As American Muslims, it is extremely painful for us to see that our country has not only practiced torture as a means of interrogation but has also practiced extraordinary rendition, using the services of Muslim dictators to torture prisoners and thus making torture a standard practice of for suppressing freedom of speech in Muslim countries. We are glad that some of these tyrants who practiced torture on a mass scale have been disgraced through the Arab Spring, and we hope that others will soon follow.  We demand that the prison at Guantanamo Bay be closed because it is a tarnish on our country’s name. It has become a symbol of torture for the world and must be closed in order to clear our country’s name.” Other speakers at the event included torture victims, religious leaders, and human rights advocates.  Dr. Syeed was invited by the National Religious Campaign Against Torture, of which the Islamic Society of North America is a founding member.  The event was also sponsored by Amnesty International, Center for Constitutional Rights, Disciples Justice Action Network, Interfaith Action for Human Rights, Maryknoll Office for Global Concerns, Torture Abolition and Survivor Support Coalition, Witness Against Torture and World Can’t Wait.
Read more
0shares