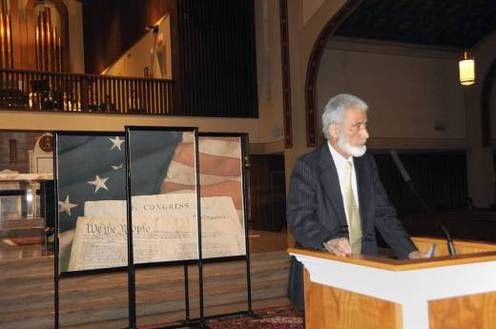 On June 27, 2013, Dr. Sayyid M. Syeed, ISNA National Director for Interfaith & Community Alliances, joined an Interreligious Prayer Gathering for Religious Freedom organized by the Catholic Diocese of Arlington.  Representatives of Lutheran, Anglican, Mormon, Hindu, Buddhist, and other faith traditions were also present. The event was initiated in response to a call by the United States Conference of Catholic Bishops (USCCB) that all its members should observe a Fortnight for Freedom, a time of prayer and advocacy to raise awareness on the issue of religious freedom in our beloved country.  A similar occasion was also observed last year.  As the Catholic Diocese said, “These values which formed our nation are often the subject of discussion these days, but not often enough the subject of prayer.” Dr. Syeed offered the following remarks: “We recognize this as our religious duty and continuously reiterate our commitment to the Qur’anic verse: “There is no compulsion in religion” (2:256).  We are commanded to protect and respect all places of worship: churches, synagogues, temples, hermitages, or wherever God’s name is glorified, in whichever language, form, or style. “We reject those interpretations of our faith that are evoked to compel others in religion and to desecrate what is sacred to a different faith tradition.  We want to assure our partners from other faith groups that we will stand shoulder to shoulder with them in making religious freedom our top priority here in this country as well as around the world.  Many of our brothers and sisters have made America home because the core value of religious freedom is at the heart of the American Constitution. “In a pluralist society, we have to be vigilant that we accommodate various faith requirements with respect and dignity.  We cannot allow discrimination against any religion nor impose hardship towards their free practice.  We are here to express our gratitude to the Almighty God and celebrate what we have accomplished so far and pray that the Almighty God give our leaders and people the vision, understanding, and wisdom to let our diverse faith practices and values flourish, enrich, and strengthen our nation.  God bless America.”
Read more
0shares