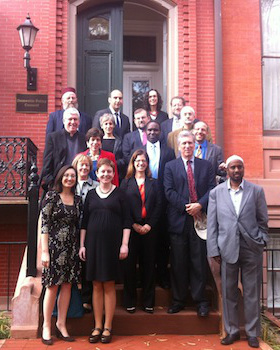 ISNA’s Washington, DC-based Office for Interfaith and Community Alliances hosted the third and final Judaism and Islam in America workshop from October, 22 – October, 23 in the DC Metro area. Organized by ISNA, the Jewish Theological Seminary, and Hartford Seminary, Judaism and Islam in America 3 was the third and final workshop of a three year program designed to foster bilateral relationships between conservative Jewish communities and Muslim communities in the United States. The first Judaism and Islam in America workshop, “Assimilation and Authenticity.” was held at the Jewish Theological Seminary in New York, and provided Jewish and Muslim scholars with an opportunity to discuss moral themes and social challenges that both religious communities face. The second workshop, “Scriptural Interpretation and Law,” held at Hartford Seminary, continued the discussion, this time focusing on the intricate ways in which both Jewish and Muslim scholars examine their respective foundational legal texts in light of changing social conditions. The third workshop, “From Classroom to Congregation,” sought to bring communities, as opposed to just scholars and academics, into the broader discussion. Invited participants included community leaders and scholars from both religious traditions, all of whom discussed the ways in which Jewish and Muslim communities can enter into sustainable partnerships, particularly at the grassroots level of mosques, synagogues, and community centers. The third workshop kicked off in Washington, DC on Monday, October 22, with over twenty Muslim and Jewish scholars and community leaders meeting at a lunch arranged by ISNA in a local hotel. The program began soon after with Rabbi Dr. Burt Visotzky, Professor of Midrash and Interreligious Studies at the Jewish Theological Seminary (JTS), Dr. Sayyid Syeed, ISNA National Director, Dr. Mohamed Elsanousi, ISNA Director of Community Outreach, Dr. Arnold Eisen, Chancellor of JTS, and Ms. Kim Zeitman, Grants Manager at JTS, delivering remarks on the accomplishments of the previous workshops, and the goals of the third and final workshop. Along with Muslim and Jewish scholars and community leaders, the group included two prominent Christian scholars: Dr. Heidi Hadsell, President of Hartford Seminary, and Fr. John Crossin, USCCB Secretariat for Ecumenical and Interreligious Affairs. Later on, the group divided into three teams, each tasked with developing frameworks of Jewish-Muslim collaboration at multiple levels of interaction. The first group discussed interreligious programing, including dialogue, but also community service projects and joint-textual studies of the Islamic and Jewish religious traditions. The second group discussed the creation of a Jewish-Muslim study guide that would enhance the effectiveness of current Jewish-Muslim dialogue efforts, while the third group worked on a potential website designed to carry on the goals of the workshop. Monday’s events concluded with a public event at the ADAMS Center, during which over 80 members of local faith communities attended. The event consisted of a halal and kosher dinner, as well as a panel discussion on the future of Jewish-Muslim dialogue which featured Imam Talib Shareef, Imam of Masjid Muhammad, Rabbi Julie Schonfeld, Executive Director of the Rabbincal Assembly, and Fr. Don Rooney, Priest of the Catholic Diocese of Arlington. Introductory remarks by representatives of each organizing institution – Dr. Eisen of JTS, Dr. Syeed of ISNA, and Professor Yehezkel Landau of Hartford Seminary – brought the diverse audience up to speed with regards to the workshop’s background, while stirring remarks by Rabbi Dr. Visotzky of JTS on the goals of Jewish-Muslim dialogue efforts set the scene nicely for the subsequent panel discussion and question and answer session. On Tuesday, ISNA arranged a tour of the White House for the workshop group, as well as a meeting with senior White House Staff, including Mara Vanderslice Kelly, Deputy Director and Senior Policy Advisor of the White House’s Office of Faith-Based and Neighborhood Partnerships, and Jarrod Neal Bernstein, the White House’s Director of Jewish Outreach. The meeting allowed ISNA to brief White House staff about its important interreligious dialogue with the conservative Jewish movement, as well as provided the workshop group with an opportunity to have a productive discussion with the White House’s Office of Faith-Based and Neighborhood Partnerships staff on interreligious partnerships and cooperation. Following the meeting, the group met for a final time at the El-Hibri Charitable Foundation, where the program began with welcoming remarks by the foundation’s president, Robert Buchanan, who thanked the group for their interfaith efforts and praised the workshop for its accomplishments and goals. Following lunch the group continued their work from the previous today, with each sub-group presenting their findings to all participants, all of whom provided helpful feedback to each other. The intimate setting at the El-Hibri Foundation also allowed for ample time for each participant to get to know one another, and form the type of lasting partnerships that undergird effective interfaith programs. Participants praised the workshop for building crucial building blocks between Muslim and Jewish communities. One participant, Fr. John Crossin, remarked that he had been “encouraged by, and will continue to encourage, interreligious efforts like this workshop.” He also said, “It is my hope that this discussion will continue on in new and exciting ways.” Another participant, Rabbi Burton Visotzky, key member of the workshop’s organizing committee, said that he is “grateful to Allah for the opportunity to sit down with Muslims and learn from the Qur’an about how we may be able to get to know one another.” The workshop concluded with the group pledging to translate the accomplishments of the third workshop into concrete plans for Jewish-Muslim projects in the near future.
Read more
0shares