ISNA Condemns Violence in Egypt and Libya and Mourns the Death of U.S. Ambassador Stevens and other Americans; Denounces the Creation of a Profane Video of the Prophet Muhammad (PBUH) 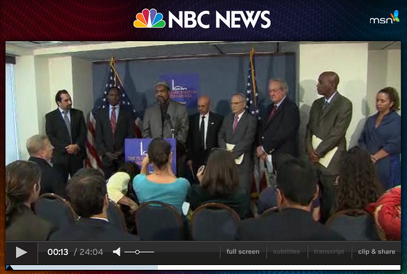 (WASHINGTON, DC – September 12, 2012) Earlier today, the Islamic Society of North America held a press conference today to condemn the murder of U.S. diplomats in Libya and the attack on the U.S. Embassy in Cairo.  ISNA President Imam Magid was joined by senior religious leaders and Libyan Ambassador Ali Suleiman Aujali, who together mourned the loss of U.S. Ambassador Christopher Stevens and other Americans.  Imam Magid delivered this statement: “The Islamic Society of North America (ISNA) unequivocally condemns the killing of U.S. Ambassador to Libya Christopher Stevens, and his staff and condemns the attack on US Embassy in Cairo. Reports indicate that those who killed him did so as a reaction to a video depicting the Prophet Muhammad (peace be upon him) in a profane manner. Although we believe that this video is hateful and bigoted, this could never be an excuse to commit any acts of violence whatsoever. The Prophet (peace be upon him) is loved and respected by hundreds of millions of people across the world, and no one take this from our hearts. No one should fall into the trap of those who wish to incite anger. The Prophet (peace be upon him) should be our example in everything we do, and even though he was attacked and insulted many times throughout his life, he always reacted with compassion and forgiveness, never with revenge or violence.” Rabbi David Saperstein of the Religious Action Center of Reform Judaism added: “This loss of life in this manner is an affront to values of humanity and tolerance that are the core of Christianity, Judaism, and Islam.  I also stand here today to condemn the video that apparently spurred these incidents.  While we defend the right to free speech, even repugnant speech, these kinds of messages on the internet are so clearly crafted to provoke, to offend, to evoke outrage.  The denigration of religion, the mocking of religious leaders, the intentional framing of religious texts and tenets in this manner must be repudiated by all religious leaders.” Rev. Dr. Welton C. Gaddy of Interfaith Alliance, spoke on a personal note: “I am embarrassed and ashamed that the Christian religion has been associated with an act as hateful as that of releasing a film intended to incite violence and even to cause the deaths of innocent people.  It is a form of rhetorical hate crime.  It has no place in our democracy or in Christianity.  And for one person to endorse a film and to commend it to the world bearing the name of Christ, that causes this kind of loss and violence and division, is wrong.  The Christian religion is about peace, just as Judaism, just as Islam.  And I want to say for all of you to hear, that in the name of Christianity, I condemn the promotion of that kind of hatred and weep over the kind of deadly consequences it has provoked.” The Islamic Society of North America also issued a statement regarding its position on the video being circulated by anti-Muslim hate groups that depicts the Prophet Muhammad (peace be upon him) in a very profane manner.  Please click HERE to read the full statement.
Read more
0shares