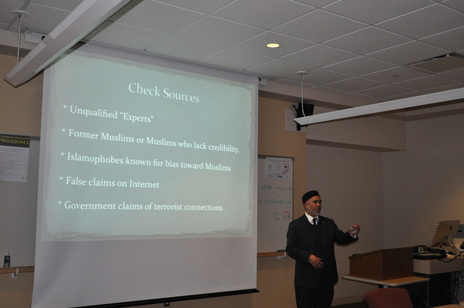 (Plainfield, IN 3/10/14) Last week, Islamic Society of North America (ISNA) Communications Director Edgar Hopida spoke to journalism students on “Covering Islam in the Media” at Ball State University located in Muncie, Indiana. The presentation consisted of the basic beliefs and practices of Islam as well as common negative frames that journalists typically use when covering stories about Islam and Muslims. Hopida also provided alternative frames and stories that journalists can cover that reflect more accurately, the diversity of the American Muslim community. “Caricatures and unfair generalizations about Islam and Muslims have unfortunately dominated the media discourse,” says ISNA Communications Director Edgar Hopida. “It is hoped with the future journalists who come out of institutions of higher learning, that a fair, more nuanced coverage of Islam and the Muslim community is reflected in their news stories.” This presentation was part of a series of guest speakers invited to speak at Professor David Sumner’s Special Reporting Class to talk about how their religious tradition is covered in the news. The Islamic Society of North America (ISNA) is the largest and oldest Islamic umbrella organization in North America. Its mission is to foster the development of the Muslim community, interfaith relations, civic engagement, and better understanding of Islam. – END – CONTACT: ISNA Communications Director Edgar Hopida, 619-913-0719 or 317-839-1820, ehopida@isna.net
Read more
0shares