The Islamic Society of North America (ISNA) co-convenes a broad-based working group to discuss the crisis in Syria and how to support the Syrian people through efforts to advance human rights and democracy in Syria.  At least 50 people were in attendance from approximately 40 American organizations including Muslim, interfaith, and Syrian American groups. A planning committee of national Muslim organizations, including ISNA, the Muslim Public Affairs Council, the Council on American-Islamic Relations, and the Islamic Circle of North America, convened the meeting.  ISNA has long been greatly concerned about the condition of the Syrian people, the crimes against humanity being committed there, and the need for greater relief efforts. The working group discussed ways to expand into a wider network of organizations in order to increase public awareness about the Syrian situation.  The discussion included an informative presentation by a renowned polling firm regarding American public perception on the conflict. 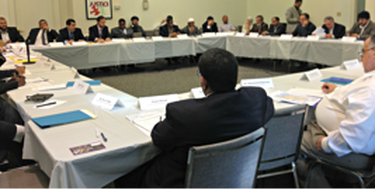 ISNA President Imam Mohamed Magid offered welcoming remarks at the meeting, thanking everyone for attending and supporting these efforts.  At the conclusion of the meeting, those in attendance agreed to continue and build upon their efforts through this new broad-based working group.
Read more
0shares