0shares
This morning, Imam Mohamed Magid, President of the Islamic Society of North America, joined other national religious leaders at the Washington National Cathedral to call for an end to gun violence.  They honored the memories of those who lost their lives one week ago in Newtown, CT, and insisted that Congress and the President work to prevent such a tragedy from ever happening again.At 9:30 a.m. EST, the religious leaders listened to the tolling of the Cathedral’s funeral bell, calling upon churches and houses of worship around the country to ring bells at 9:30 a.m. EST in honor of each life that was taken in last week’s tragedy. “Our nation has seen so many incidents where innocent lives have been taken,” said Imam Magid, “but our national conscience was shaken when we saw photographs of the beautiful children who died at Sandy Hook Elementary School. We call on the thousands of mosques nationwide to have sermons on the issue of gun violence, asking their congregations to call on their representatives to bring about a solution to end gun violence in America. As religious communities, we are in the business of saving lives. The Holy Qur’an and the Hebrew Bible both say that to kill one innocent life is to kill all of humanity, and to save one innocent life is to save all of humanity.” 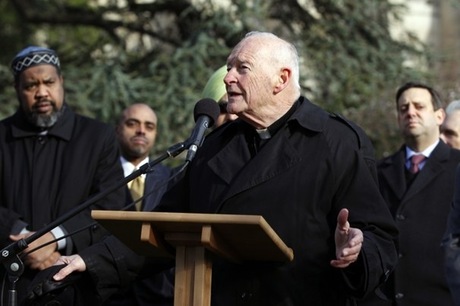 “As people of faith, we have the moral obligation to stand for and with the victims of gun violence and to work to end it,” said the Very Rev. Gary Hall, dean of Washington National Cathedral. “Let us pray not only for the victims and those affected by the tragedy but also for ourselves, that we may have courage to act, so that the murderous violence done on Friday may never be repeated.” The Islamic Society of North America (ISNA) is a member of Faith United to Prevent Gun Violence as well as the Coalition to Stop Gun Violence (CSGV).  ISNA has continually spoken out after each major tragic shooting in the past year, and it is time to stop the epidemic of gun violence once and for all.  ISNA supports and reaffirms the constitutional right of all citizens to bear arms, and calls for sensible federal policies to ensure that guns stay out of the hands of those who pose a risk to society. Specifically, we join Faith United and the CSGV in calling on Congress and the President to keep guns out of the hands of dangerous criminals and those with serious mental illness by closing gaps in the background check system, including requiring criminal background checks for all gun sales.  Currently, 40% of gun sales occur without a criminal background check, and 74% of  members of the National Rifle Association agree that criminal background checks should be required for every gun purchase.  We also ask that federal policies enhance law enforcement’s ability to combat the flow of illegal guns into our communities and enforce existing gun laws. Earlier this week, Imam Magid joined his local interfaith community in Northern Virginia to hold a prayer vigil in memory of the 28 people who lost their lives in Newtown.  The interfaith leaders all signed a letter addressed to Connecticut Governor Dan Malloy.  Imam Magid also sent a letter on behalf of ISNA to express his condolences. “We must come together as people of faith, representing the range of religious traditions throughout our country, in a collective call to action to end this crisis,” said Rabbi David Saperstein, director of the Religious Action Center of Reform Judaism. “The time to end senseless gun violence is now, and as religious leaders, the responsibility to provide moral leadership is ours.”
Read more
0shares