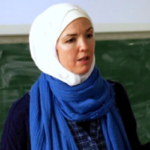 Ingrid Mattson is a scholar of Islamic studies, an expert in interfaith relations, and a Muslim religious leader. Since 2012, she has held the London and Windsor Community Chair in Islamic studies at Huron University College in London, Canada. Previously she was professor of Islamic studies at Hartford Seminary where she developed and directed the first accredited graduateprogram for Muslim chaplains in America. From 2001-2010, Dr. Mattson was elected and served as vice-president, then president, of ISNA. Her writings focus on Quranic studies, theological ethics and interfaith engagement. Dr. Mattson is a senior fellow of the Royal Aal al-Bayt Institute for Islamic Thought in Amman, Jordan and has served on many boards, including the Interfaith Taskforce of the White House Office of Faith-Based and Neighborhood Partnerships, the Council of Global Leaders of the C-100 of the World Economic Forum and the Leadership Group of the U.S.-Muslim Engagement Project.