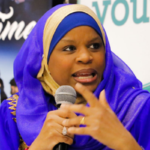 Ieasha Prime is the Director of Women’s Programming at Dar al Hijrah Islamic Center in Virginia and the founder of the DC Muslim Women’s Conference.
She converted to Islam more than 20 years ago after being a Youth Ambassador to Morocco and Senegal. There she developed a thirst for knowledge that would cause her to sit at the feet and learn from some of the top Islamic Scholars of our time. After having participated in several circles of knowledge in the US, Ieasha decided to pursue religious studies abroad. She studied Arabic, and Quran at the Fajr Institute in Cairo, Egypt. Later, she moved to Hadramaut, Yemen and enrolled in Dar al Zahra, an Islamic University for Women. There she studied Aqeedah, Quran, Hadith, Arabic, Jurisprudence (Fiqh), Islamic law, Purification of the Heart and other religious related learning. She has received several scholarly licenses (ijaza).
The work that she is most committed to and enjoys have been the development of Islamic programming, Islamic Studies curriculum and Rites of Passage programs for youth and adults. Majority of her life has been spent as an educator and activist. She is most passionate about combining Islamic studies, cultural art, activism and service for the purpose of training leaders to rise above whatever challenges stand in their way and that of the community they serve.
In addition to her full-time work, she is the co-founder and Executive Director of Barakah INC, an organization committed to training Muslim women in traditional Islamic sciences with a focus on modern application. Sister Ieasha is recently known for her participation in the National Women’s March, and the courses she teaches on traditional knowledge, the challenges of race and gender in the Muslim community and Spirituality.
Ieasha Prime is a proud wife and mother of three children.