ISNA is an active member of Fighting Poverty with Faith, a nationwide, interfaith movement to cut domestic poverty in half by 2020.  This annual mobilization utilizes the strength of the coordinated faith communities and individuals across the nation to advocate for clear, immediate policy solutions to address the root causes of poverty.
In 2011, ISNA drew attention to the issue of hunger and pending budget cuts that would leave struggling families across the United States without access to supplemental nutrition assistance, or food stamps. In 2012, ISNA aided in “Building Opportunity through Affordable Housing for All,” an initiative that seeks to increase and preserve the supply of rental housing for extremely low income families.
Fighting Poverty with Faith (FPWF) encourages local communities to plan community-wide, preferably interfaith, events and actions during the week-long mobilization. Through these events, communities have the opportunity to make a difference in their communities while educating other community members and elected officials about homelessness and the need for affordable housing options.  Each year, FPWF also advocates for a specific federal policy change, such as protecting food stamps or providing affordable housing.  Find out how you can get involved by visiting the FPWF website or contacting us here and clicking “Domestic Poverty and Economic Justice.” 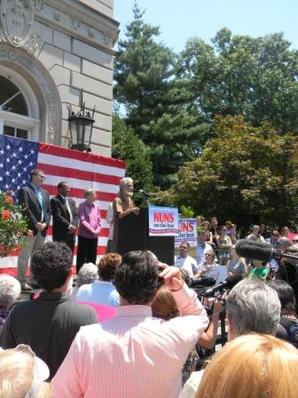 In 2011, ISNA joined national religious leaders for the Faithful Budget Campaign, an effort launched by the religious community in 2011.  It calls on Congress to protect programs that serve the poor and vulnerable as Congress pursues efforts to reduce the federal deficit. In 2012, the Faithful Budget Campaign released its Priorities for a Faithful Federal Budget, a 54-page comprehensive document signed by 36 national religious organizations.
All our faith traditions place people who are impoverished and marginalized at the forefront of concern.  The current fiscal debates – at their heart – are a struggle for the soul of our nation and its moral conscience.  We grieve at the soaring gap between rich and poor; faith and fairness require that we preserve and strengthen vital lifelines for people who are struggling to overcome hardship and poverty in the US and abroad. The faithful way forward to fiscal health calls for a focus on job creation, revenue increases, a shared commitment to the common good, and cuts in unnecessary military spending.
The Faithful Budget Campaign was created after an interfaith coalition in Washington, DC began daily Capitol Hill prayer vigils in the summer of 2011, working together out of our common sense of urgency around the need to protect social safety net programs that serve people living in poverty.