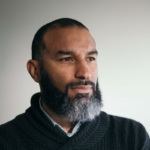 At Dartmouth College, Dawood provided spiritual and religious support, offered educational seminars, and lead congregational prayers for Muslim students, and residents of the greater Hanover area. Dawood also worked to foster understanding and dialogue among diverse campus groups by building and maintaining interfaith relations. During his residence in South Africa, Dawood converted to Islam and then spent five years in Damascus studying Arabic, Islam, and spirituality. Upon completion of his studies, he relocated to New Haven CT where he served as Imam of Masjid Al-Islam. While in New Haven he also worked as a teaching assistant and engaged in research at Yale University. Dawood also served as Director of Outreach at the Zayed Center for Islamic Culture in the United Arab Emirates, engaging in public speaking within U.A.E. and abroad, emphasizing ethics and tolerance between Muslim and non-Muslim communities. Dawood spent five summers teaching Arabic language at the Zaytuna Summer Arabic Intensive. Dawood has a B.A. in Community Studies and an MA in Globalization Studies.