Children of Abraham: Jews and Muslims in Conversation 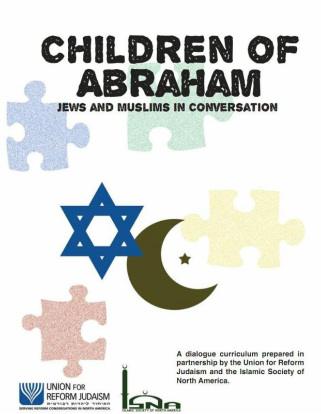 Children of Abraham: Jews and Muslims in Conversation is an interfaith dialogue program jointly organized and facilitated by the Islamic Society of North America (ISNA) and the Union for Reform Judaism (URJ).  In 2007, ISNA and the URJ partnered to promote a nationwide series of local interfaith dialogues focusing on Muslim and Jewish communities, to promote mutual respect, understanding, and communication and to strengthen their capacity to advance peace and social justice on a global scale.  That year, the president of each organization gave a keynote address at the other’s convention, announcing their commitment to enhancing Jewish-Muslim relations and garnering support for the project in both communities.
Together, the organizations created a methodology and handbook expressly for this exchange, providing a roadmap for the groups to engage with one another and explore the commonalities in their spirituality and practice.  The guide is intended to be a starting point for those who have minimal, if any, experience with interfaith dialogue, and its 11 chapters discuss issues such as zakat and tzeadakah, the Qu’ran and the Torah, and avodah and salat, highlighting important aspects of both religions.
If your community or Islamic center is interested in participating, please contact the ISNA Office for Interfaith and Community Alliances at 202-544-5656 or let us know about your interest in ISNA’s interfaith dialogue efforts by clicking here.

Purpose of the Program

Despite concerted efforts by Muslim and Jewish communities to maintain a relationship of mutual respect, their actions are too often overshadowed by images that appear on nightly television news, such as the conflict in Israel/Palestine or al-Qaeda’s terrorist plots.  As a result, many in both communities fall victim to ignorance about the other, allowing the actions of extremists in each to create a false narrative about the religion and its adherents as a whole.  In reality, the two religions share abundant spiritual, practical, and historical similarities, and ISNA and the URJ seek to highlight this through their field-based series of interfaith dialogue.
The purpose of the dialogue, Children of Abraham: Jews and Muslims in Conversation, is to build bridges between communities by establishing a human connection that supersedes the overtones of religious labeling.  The dialogue occurs on a local level, through a widespread series of sessions between paired synagogues and Islamic centers/communities.  Participants use the Children of Abraham Handbook for Muslim-Jewish Dialogue, a curriculum developed jointly by ISNA and the URJ, which initiates their first steps toward restoring trust and confidence and promotes mutual respect and understanding through constructive communication.
Thus far, ISNA and the URJ have identified and paired 15 mosques and 15 synagogues for grassroots Muslim-Jewish dialogue, facilitated the implementation of the programs, and trained the leaders of the program on how best to conduct dialogue.  Feedback from the leaders of the Islamic centers and synagogues was very positive, and each expressed interest in continuing dialogue efforts.  One pair in New York City built upon their interfaith dialogue by organizing a joint “Mitzvah Day,” where they conducted a service project at a local soup kitchen.  The effort was well reported in local as well as international press, including positive coverage by both Muslim and Jewish perspectives.

Judaism and Islam share a similar tradition that even if the trumpet to signal the end of time is blown and you are holding a seedling in your hand, then you should plant it. There is no doubt that countless generations of our ancestors – Jews and Muslims – believed that they would live to witness the end of the world. Plagues, famine, war and other calamities created a deep sense of betrayal in the ability of human beings to ensure their own security. Still, humanity carried on. Despite unbearable and countless tragic losses, we continued to work for a better future – for our children and our grandchildren.
Our faith traditions do not require us to be idealistic or even optimistic (although those can be healthy attitudes); rather, our traditions require us to work for a better future despite our frustration and pessimism. But faith also requires the expectation of holy surprises. With our limited imaginations and unlimited egos, we confidently assert what can or cannot be – only to be proven wrong again and again. Thus, in the first place, faith requires us to imagine the possibility that the majority of American Muslim and Jewish communities can develop respectful, productive relationships.
There are good reasons for the engagement of American Jews and Muslims at this point in our history. On the one hand, religion seems to have a particularly strong role in our society. On the other hand, perhaps there has never been a time in American history when “religion” has been so widely seen as a negative force. Conflicts among religious groups have contributed to a general loss of confidence in religion. Many young people wonder why they should bother with ancient traditions that create antagonism, when diversity is such an important part of their lives. We need to prove that affirming our differences can be done in an atmosphere of respect, and that we can even move beyond mutual respect to play a positive collective role in society.
There are those who see the empowerment of American Muslims and American Jews as a zero-sum game. This perspective is not only ethically problematic, it is, I believe, simply wrong. The reality is that each of us is a small religious minority in a society in which we must regularly assert our rights against the majority. This does not mean that the majority is always hostile to our assertion of rights. However, these rights that have been hard-won by generations of Americans have not been uncontested. Prejudice is highly mutable: it passes easily from Jew to Muslim to Black to Arab. If our communities contribute to the production of mutual stereotypes and if we justify discrimination against the other, we are sowing the seeds of our own destruction.
One Muslim scholar has characterized many of the statements that faith communities make about others as “false witness” (qawl al-zur). Thus, beyond the pragmatic need to encourage a culture of respect for religious diversity and rights, we are ethically bound to speak the truth about each other. We can no longer rely on rumors, innuendo, medieval apologetics and sweeping generalizations. We need to get the truth about each other from each other.
The Islamic Society of North America was honored to have Rabbi Eric Yoffie speak at our annual convention in Chicago in 2007. As President of ISNA, I was proud that our community was so receptive to Rabbi Yoffie’s address and to this project that was to follow. Many of our members have been engaged in dialogue with members of the Jewish community at the local level. Many more have considered this engagement important, but have lacked the support to move forward. The American Muslim community is limited in its institutional resources – we do not yet have enough American born and educated religious leaders, education specialists and administrators, much less seminaries and research institutions, to meet other, more established religious communities on equal terms. What we do not lack, however, are Muslims all over America with a sincere desire to contribute positively to a vibrant, pluralistic and just American society. I hope that this guide will help Jewish and Muslim communities begin or continue to engage in the important work of mutual understanding and, hopefully, productive engagement.
–Ingrid Mattson, PhD, President, The Islamic Society of North America

Interconnected since the time of Abraham, we Jews and Muslims share much in common: ancient monotheistic faiths, cultural similarities and, as minority religions in North America, experiences with assimilation and discrimination. Having said that, there also exists profound ignorance between Jews and Muslims. Jews are not well educated about Islam, and Muslims are not well educated about Judaism.
In our increasingly interconnected and interdependent world, we can ill afford to segregate ourselves within our mosques and synagogues. Rather, we must educate ourselves and each other, thus taking a necessary first step toward global understanding and religious harmony.
In the pages that follow, you will find 11 lessons that the Union for Reform Judaism, in concert with the staff of the Islamic Society of North America (ISNA), has created to achieve this goal. I am proud that the Union is working with ISNA to conquer the mutual ignorance that exists among our adherents and I am deeply touched by the commitment of our synagogues, clergy, and lay leaders to participate in The Children of Abraham: Jews and Muslims in Conversation. Let these lessons serve as a springboard for ongoing cooperation and dialogue to which we can all be committed.
There are many tough issues that we need to address—terrorism, Israel, the plight of the Palestinians, and human rights, among others—and this will not be an easy task. But neither is that a reason to desist. Instead, the challenge should serve as a catalyst, an impetus to do more and to more fully commit ourselves to this dialogue. Let us agree, on the one hand, to approach these issues with humility; on the other hand, let us also agree that we will assert our convictions with passion, even as we remain respectful of our disagreements.
We know from experience that if this endeavor is to succeed, it must not be one-sided. As Jews, we will share our faith with Muslims, and Muslims, in turn, will share their faith with us. As a community we must see each other as partners, equal in weight and stature, in this venture. This means we must share equally the costs of the program, the responsibilities of facilitation, the hosting of dialogue sessions and above all, commitment to its success. It is my sincere hope that as we learn about each other’s belief and practices and as we tackle the tough issues that lie before us, we will learn to see one another as human beings created in the image of God.
The leadership and staff of the Union are deeply committed to the success of this program. If, as you prepare to dialogue with your local Muslim community, we can provide assistance, including helping you find a mosque to work with, please do not hesitate to contact the Commission on Interreligious Affairs of Reform Judaism at 202-387-2800 or by email at interreligious@urj.org.
We wish you much success as you take on this sacred endeavor.
–Rabbi Eric H. Yoffie, President, Union for Reform Judaism