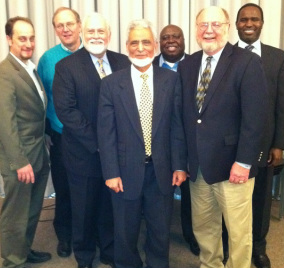 In January 2008, leaders from the Islamic Society of North America (ISNA) joined leaders from the American Baptist Churches USA (ABCUSA), the Cooperative Baptist Fellowship (CBF), and the Alliance of Baptists in Hartford, Connecticut to begin discussions on ways Baptist and Muslims can speak, share and learn from each other.  Muslims were inspired by the Qur’anic verse: “O mankind! We have created you from a male and a female, and made you into nations and tribes, that you may know one another (49:13).” Baptists sought to fulfill Paul’s admonition in Romans 12:18: “If it is possible, so far as it depends on you, live peaceably with all.”  The effort served as a response to “A Common Word,” a letter signed by 138 Muslim scholars and addressed to Christian leaders around the world in October 2007, to encourage communication and good relations between faith groups.

Together they developed the framework for the first-ever National Muslim-Baptist Dialogue, held in January 2009 in Boston, MA at the Andover Newton Theological School. The conference featured approximately 100 Baptist and Muslim leaders from across the United States. ISNA National Director Dr. Sayyid M. Syeed, ABCUSA Secretary General Dr. Roy A. Medley, and Andover Newton President Dr. Nick Carter led task forces for the development of the conference.
The national dialogue focused on the second part of “A Common Word” — “Love of Neighbor” — and featured presentations on one another’s beliefs and traditions by religious leaders from both communities, observations of worship services, and small-group discussions to share experiences. The leaders also drafted a “Statement of our Common Will,” pledging to:

Following the conference, articles on the Baptist-Muslim dialogue were published in the American Baptist Quarterly journal in Spring 2009.  They have since been widely circulated in Muslim and Christian circles both nationally and internationally. Additional public attention was drawn to them when Denzel Washington referenced the dialogue on late night talk shows.
To read more about the 2009 National Baptist-Muslim Dialogue, please click here.  To view photos from the dialogue, click here.

In 2010, EthicsDaily released a documentary called “Different Books, Common Word: Baptists and Muslims,”which featured the relationship between ISNA and ABCUSA. 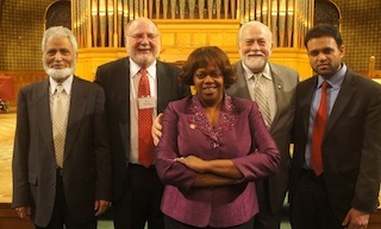 In 2012, a second national conference and three regional conferences took place to discuss the second part of “A Common Word” — “Love of God.” Over 75 Baptist and Muslim leaders from across the United States attended the national dialogue to explore the theme “Loving God as a Pathway to Peace” in an effort to improve relationships between their two faith communities.
The dialogue kicked off with speeches by Ambassador Suzan Johnson Cook, President Obama’s Ambassador-at-Large for International Religious Freedom, and Ambassador Rashad Hussain, President Obama’s Special Envoy to the Organization of Islamic Cooperation.
Dr. Zulfiqar Ali Shah of the Fiqh Council of North America and Dr. Aliou Niang of Union Theological Seminary elaborated on the theological concept of peace as a human ideal by reflecting upon the nature of God as the author and source of peace. Dr. Zeki Saritoprak of John Carroll University and Dr. E. Glenn Hinson, a renowned seminary professor, spoke about how we can develop interior, private, individual peacefulness as a pathway to outward peace with other humans and all of creation. On Sunday, Dr. Jimmy Jones of Manhattanville College and Dr. Daniel Buttry of American Baptist Churches USA addressed the challenge that we have to work for peace both locally and globally, not just within our own hearts, and gave practical examples of ways to promote peace in our own communities.
The Rev. Dr. Roy Medley, General Secretary of American Baptist Churches USA (the second largest Baptist denomination in the United States), and Dr. Sayyid M. Syeed, ISNA National Director for the Office for Interfaith & Community Alliances, led the Baptist and Muslim delegations throughout the weekend as they explored each other’s beliefs, sacred texts and religious practices through presentations, panel discussions and small group conversations.
The highlight of the conference took place when the Islamic Council of New England (ICNE) co-sponsored an event for dialogue participants with the Islamic Center of Boston in Wayland, MA. There, participants celebrated the “next generation” of interfaith peacebuilding by hearing from young religious activists and scholars about their experiences with the religious “other.” Celene Lizzio, a lecturer at Merrimack College and former ISNA fellow, and Mostafa Hussein, a Fulbright scholar at Brandeis University, joined local pastor Jeremy Battle and Kori Bowen, an international missions pastor from Texas.
In addition to ISNA, the conference was co-sponsored by the American Baptist Churches USA, the Cooperative Baptist Fellowship, the Alliance of Baptists, the Progressive National Baptist Convention, the Lott Carey Foreign Mission Society, and Andover Newton Theological School. The program was been made possible in part by a grant from the Boston Baptist Social Union.
ISNA and the other co-sponsors are working to assemble the dialogue’s presentations into a formal publication, and to develop a way to sustain the positive outcomes of last weekend’s dialogue between Baptist and Muslim leaders.