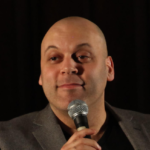 Amer Zahr is an Arab-American comedian, speaker, writer, academic, and adjunct professor at University of Detroit Mercy School of Law. He draws on his experiences growing up as a child of Palestinian immigrant parents, performing and lecturing on topics like politics, society, Islam, growing up Arab, and more. He headlined a packed house at New York City’s world-famous Carnegie Hall, alongside Palestinian-American comedians Said Durrah, Mona Aburmishan, and Mike Easmeil. He also headlined at the world-famous John F Kennedy Center for the Performing Arts in Washington, DC. He produced this show as well, making it the first time that an all-Palestinian cast took the stage at the internationally-renowned venue. Amer also served as a surrogate for presidential candidate Bernie Sanders. He has produced and headlined in 3 of his own comedy tours, “1001 Laughs Comedy Tour,” “We’re Not White!” and “In 1948.” He founded and produced the first-ever “1001 Laughs Ramallah Comedy Festival.”